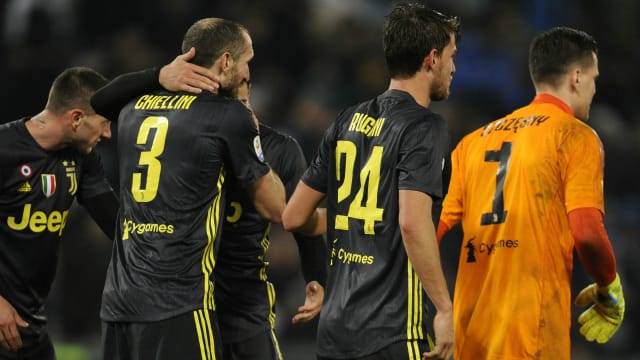 Giorgio Chiellini conceded Juventus' first hour against Lazio was their worst performance of the season, but paid tribute to goalkeeper Wojciech Szczesny for keeping them in the game.

Szczesny made five saves in a brilliant performance as Juve overcame a poor display to win 2-1 on Sunday, extending their lead atop Serie A to 11 points over Napoli.

The away side came from behind to score twice in the final 16 minutes, substitute Joao Cancelo netting his first goal for the club before earning the match-winning penalty scored by Cristiano Ronaldo two minutes from time.

Emre Can had earlier scored an own goal and it looked like Juve were on course for their first league defeat of the campaign, but the efforts of Szczesny, who made his best save from Marco Parolo in the first half, kept them alive before the fightback.

"For 55 to 60 minutes it was certainly the worst Juventus performance of the season," Chiellini said to Sky Sport Italia.

"Wojciech Szczesny kept us afloat for an hour. Then we managed to fight back and win the game. It has to help us mature, because we have another big game coming up on Wednesday in the Coppa Italia with Atalanta."

Head coach Massmiliano Allegri, who brought Szczesny into his side as part of three changes, agreed with his captain Chiellini, who came on shortly before half-time to replace the injured Leonardo Bonucci.

Allegri added: "Szczesny is doing very well, but we knew he was a great goalkeeper. I think the biggest leap forward he has made is in his focus over 90 minutes and confidence.

"Leonardo Bonucci's ankle is swollen, so we will see, but we have got Martin Caceres coming in. Miralem Pjanic will be back midweek.

"We knew it was important to win after Napoli drew with Milan. I told the lads a win would be a step forward, even if we didn't play that well."

Can's own goal was part of a disappointing overall display from the former Liverpool midfielder, but Allegri took the blame for that.

He said: "It's my responsibility, as I tried to play with Emre Can in front of the defence and that was a mistake. He doesn't have the right timing yet, so I put him in a very difficult position. I put [Rodrigo] Bentancur there instead and it went better.

"We didn't do well for the first hour, but the last half hour we did better. At half-time, I told the lads to pass it more cleanly, not make so many hasty mistakes.

"The introduction of [Federico] Bernardeschi and Cancelo made us more organised. Those who come off the bench are essential.

"The Lazio pressing game caused us problems, especially because our own passing was so misplaced. It felt like we were all wearing different jerseys in the first half.

"It was a difficult match, but I've been at Juventus for five years and have never had an easy ride at the Olimpico against Lazio, so it wasn't a surprise."