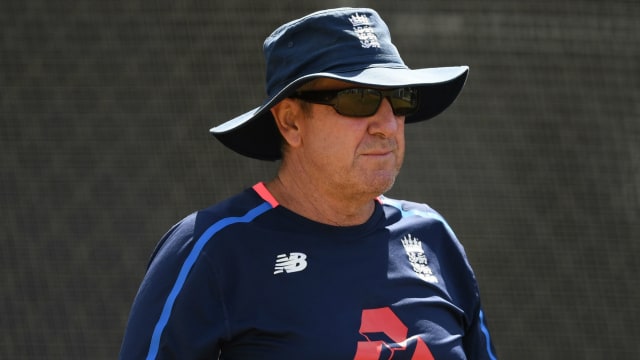 Trevor Bayliss says England showed their lack of "mental discipline, guts and determination" as they were subjected to a first-Test hammering by West Indies in Barbados.

The tourists slumped to crushing 381-run defeat at the Kensington Oval on day four after capitulating to an embarrassing 77 all out in the first innings and posting only 246 second time around.

England's latest horror show came just 10 months after they were blown away for a pitiful 58 in the first Test against New Zealand.

Bayliss warned they must show more application and grit in the remainder of the three-match series.

The England head coach said: "I think it gets down to a bit of guts and determination to get through those tough periods,

"It's not the first time that we've succumbed in a short space of time. The boys are in the dressing room hurting and I'd be worried if they weren't.

"Do they lack mental discipline? Personally I think so. You don't have to have perfect technique to be able to score runs or take wickets: it's how you go about using it.

"On this occasion we've certainly been lacking in that department. I'm not sure I can repeat what has been said [in the dressing room]."

We are all out for 77. https://t.co/w2quFbm5QJ#WIvENGpic.twitter.com/1MyqX50njx

Roston Chase claimed outstanding figures of 8-60 as Joe Root's side folded in the second innings and Bayliss was at a loss to explain what he witnessed on Sunday.

"They did bowl well, but every time a team does that we shouldn't be expecting to get knocked over for 77," he said. "In the second innings, the guys looked like they were trying, we made good starts but at this level you have to be able to bat longer than that.

"Chase bowled a good line and a good length. He didn't give us any easy runs to get off strike. He built that pressure up, broke down our techniques on a couple of occasions and there were some poor shots on some occasions. That adds up to eight wickets," said the straight-talking Australian.

"It's not the first time this has happened. Every time we lose a wicket it's the beginning of a collapse. And to be honest, I don't know how to explain it. There's nothing that stands out in your preparation or the lead up to the game that is any different to when we win.

"We have to work out what's the difference between when we put on a partnership after losing a wicket and losing eight or nine quick ones."