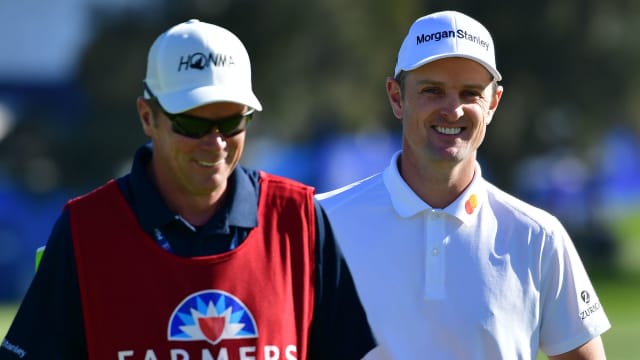 Justin Rose equalled a record as the world number one maintained his lead after the penultimate round of the Farmers Insurance Open.

Englishman Rose tied the 54-hole tournament record at 18 under following his third-round 69 in San Diego, California on Saturday.

Rose holds a three-shot lead over Adam Scott at Torrey Pines Golf Course, where he was on pace to break the record – set by Kyle Stanley in 2012.

The nine-time PGA Tour champion opened his round with three birdies and an eagle on the par-five ninth hole.

.@JustinRose99 is rolling the rock.

But, double-bogeys on the par-four fourth and 14th holes and a bogey on the par-five 18th hole tarnished his scorecard, though Rose still ended the day in pole position.

Scott, who last won on the PGA Tour in 2016, jumped into second after holing seven birdies and one eagle for a seven-under-par 65, while Jon Rahm (68) is a shot further back.

Four-time major champion and Northern Irishman Rory McIlroy is in a tie for sixth position at 11 under heading into the final round.

Defending champion Jason Day is in a six-way tie for 16th place after posting a three-under-par 69.

Former world number one Jordan Spieth is two strokes behind Day at seven under following his 72, which included a triple-bogey, two bogeys, an eagle and three birdies.

Even par. Golf is hard. pic.twitter.com/JsIGi8kB38

Tiger Woods, meanwhile, produced a one-under-par 71 as the seven-time winner stalled on the weekend.

It was a difficult day for Woods, who ended the round 13 shots off the pace following three bogeys and four birdies.