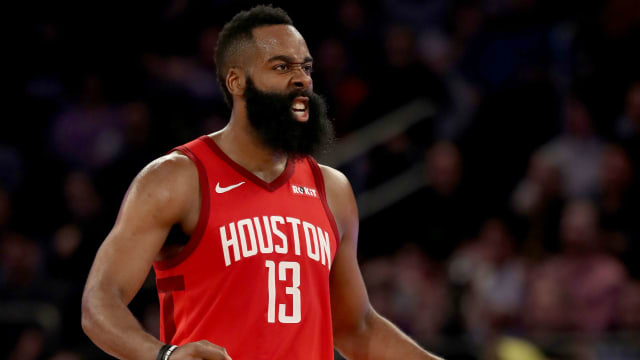 The Houston Rockets are still rolling in the NBA, beating the Toronto Raptors on Friday.

It is no secret Houston have been undermanned because of injuries, but they managed a 121-119 win against Toronto.

Kenneth Faried was recently signed by the Rockets after the Brooklyn Nets bought out his contract. The undersized forward recorded 21 points and 14 rebounds on eight-of-11 shooting in his third game with the Rockets and came up big in the clutch.

Kawhi Leonard returned to the Raptors after resting for four games and put up 32 points, seven rebounds and five assists. A bizarre series of events gave him a chance to hit the game-winner, but he airballed the last shot when challenged by Harden on the right wing.

Cedi Osman scored a career-high 29 points for the Cavaliers, but Cleveland lost to the Miami Heat 100-94.

Lou Williams recorded a triple-double with 31 points, 10 rebounds and 10 assists to lead the Los Angeles Clippers past the Chicago Bulls 106-101.

Giannis Antetokounmpo had 35 points and 14 rebounds in the Milwaukee Bucks' 108-99 win against the Charlotte Hornets.

Tim Hardaway Jr. had 10 points on just two-of-14 shooting as the New York Knicks fell short to the Nets 109-99 in Brooklyn.

Okogie with a huge dunk

Josh Okogie had no fear when he slammed one home on Rudy Gobert as the Minnesota Timberwolves lost to the Utah Jazz 106-102.

Dennis Smith Jr. and DeAndre Jordan made a lob and dunk look easy on the break in the Dallas Mavericks' 106-101 win over the Detroit Pistons.

DeAndre runs the floor for the two-hand FLUSH! #MFFL 70#DetroitBasketball 70

Golden State have been the favourites to win the NBA Finals for some years now. After an impressive showing last season, Boston were favoured to win the Eastern Conference in 2018-19. These two contenders will both have plenty of star power when they battle in TD Garden on Saturday.