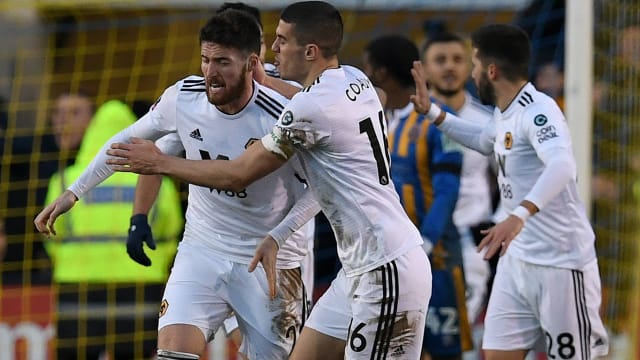 Premier League side Wolves had to come from two goals down to draw 2-2 with League One side Shrewsbury Town in the FA Cup fourth round, while Watford left Newcastle United with a 2-0 win.

The biggest win of the day came at the Etihad Stadium, however, as Manchester City demolished Burnley 5-0 to seal a place in Monday's fifth-round draw.

Derby County survived a scare away to Accrington Stanley, edging a heated encounter 1-0 after both sides had a man sent off.

Doncaster Rovers boost the League One contingent in the draw after they edged out League Two's Oldham Athletic 2-1.

Results from the 3pm games

Nuno Espirito Santo's Wolves have attracted acclaim in the Premier League this term, but they had a lucky escape on Saturday against a team two divisions below them.

The Shrews found themselves one up just after the break, as Greg Docherty's stunning effort found the top corner.

Luke Waterfall added to that 19 minutes from time, his header leaving Wolves on the brink of elimination.

But back came Nuno's men - Raul Jimenez pulled one back with a neat finish inside the area soon after, and Matt Doherty headed in the last-gasp equaliser, earning Wolves a replay.

FULL TIME: The journey continues. An incredible effort from the team. We go again in the replay!  #saloppic.twitter.com/ZiRD4xjnhp

League Two's Newport County earned themselves a home replay with a stoppage-time leveller of their own to draw at Championship side Middlesbrough.

Daniel Ayala's header early in the second half looked to have done enough for the home side.

However, Matt Dolan - a former Middlesbrough player - equalised in the third minute of added time to force a replay and leave Tony Pulis frustrated, though there was one element he was happy about.

Speaking to BBC Sport at full-time, Pulis said: "John Obi Mikel [Boro's new signing] did smashing, that was his first game for a long time. He is so composed on the ball, he lifts the rest of the team, he is that type of player."

Javi Gracia received criticism before their trip to St James' Park after making 11 changes to his team, but a 2-0 win made it look as though the Spaniard knew precisely what he was doing.

Andre Gray opened the scoring with a crisp finish following Will Hughes' inch-perfect throughball just past the hour.

And Isaac Success wrapped things up late on, bundling in from close range after Domingos Quina's cross.

(Q) @BBCSport: Did you know you were going to be subbed?

(A) @AndreGray7: Yeah so I thought I'd turn it on!  pic.twitter.com/Z5BqxnLWd7