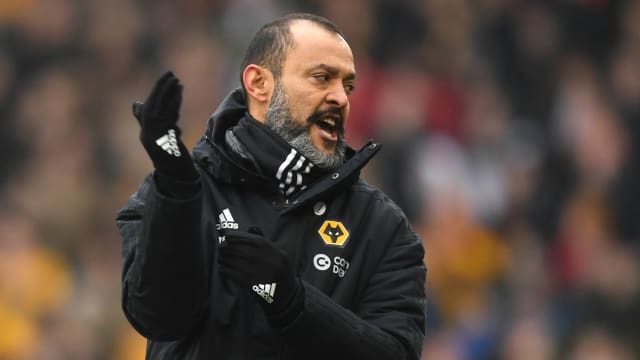 Wolves head coach Nuno Espirito Santo has suggested he could repeat his on-field celebration, even though it cost him £8,000.

Nuno was charged and fined by the Football Association (FA) after running on to the Molineux turf to celebrate Diogo Jota's late clincher in a 4-3 Premier League win over Leicester City.

Liverpool manager Jurgen Klopp received the same punishment when he marked Divock Origi's Merseyside derby winner against Everton by rushing on to the field to hug Alisson.

And while Nuno has accepted his fine, the Portuguese indicated he may have to open his wallet to pay the FA again.

"Everybody knows it is hard to contain those emotions in such a special moment," Nuno said on Friday.

"Last minute of the game, last goal, it gave us such an important victory. I tried to be as far away as possible to avoid the situation.

"But I maintain my opinion the referee made the right decision but at the same time I think everybody understood why I went onto the pitch.

"It's very difficult to say I won't do it again. I think that goes for everybody, managers and players. It is such a moment of thrill that sometimes you cannot contain yourself - it's difficult."

Wolves travel to Shrewsbury Town in the fourth round of the FA Cup on Saturday with Nuno's men having knocked out Premier League leaders Liverpool in the last round.