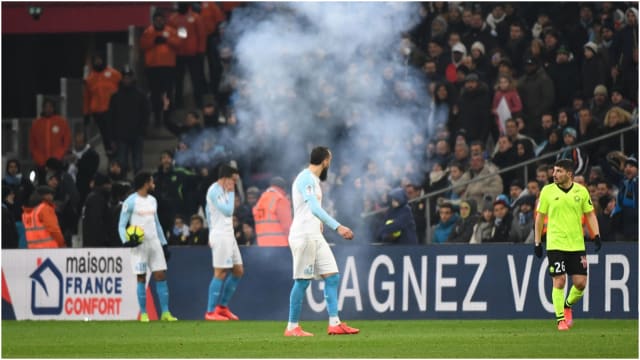 A Ligue 1 game between Marseille and Lille was halted for 38 minutes on Friday after a firecracker was thrown on to the pitch at Stade Velodrome.

Lille led 1-0 when the incident occurred early in the second half, the object exploding close to Marseille players Jordan Amavi and Kevin Strootman.

Referee Amaury Delerue took the players off the field and there was a lengthy delay before they re-emerged to restart the match.

A chaotic game was preceded by Marseille supporters protesting against the club's ownership, fans displaying a banner that called for coach Rudi Garcia to be sacked.

But they could have taken the lead in the third minute, Nemanja Radonjic denied his first goal for Marseille by a VAR review that found an offside in the build-up.

More VAR drama led to the opening goal at the end of the first half, Delerue initially awarding a corner when Marseille captain Luiz Gustavo dived in on Mehmet Zeki Celik.

The official pointed to the spot after consulting VAR and Nicolas Pepe stroked home the spot-kick, sending goalkeeper Steve Mandanda the wrong way.

Friday's game will be remembered for the long stoppage caused by a firecracker exploding at the feet of Amavi and Strootman, however.

Lille's Twitter account poked fun at the confusion, posting: "What minute of play will the game resume? Is the clock still running? Will we have 25 minutes of extra time? We also ask ourselves these questions and we will keep you informed."

When the players re-emerged a frantic atmosphere was not helped by Florian Thauvin being dismissed for a horrible kick out at Youssouf Kone, the former Newcastle United winger re-entering the field to argue with Delerue's decision.

Lille used their man advantage to control the game, but the introduction of Mario Balotelli for his debut breathed life into Marseille.

The Italy striker went close with a half-volley in the second minute of added time, but Lille countered rapidly with Jonathan Ikone setting up Pepe for his 15th Ligue 1 goal of the season.

Balotelli still had time to open his account for his new club, brilliantly heading in a Strootman corner, but the match ended with more unrest as Marseille fans got on to the pitch at the final whistle.

Victory for Lille moves Paris Saint-Germain's closest challengers within 10 points of top spot, although the runaway league leaders have three games in hand on top of their large lead.