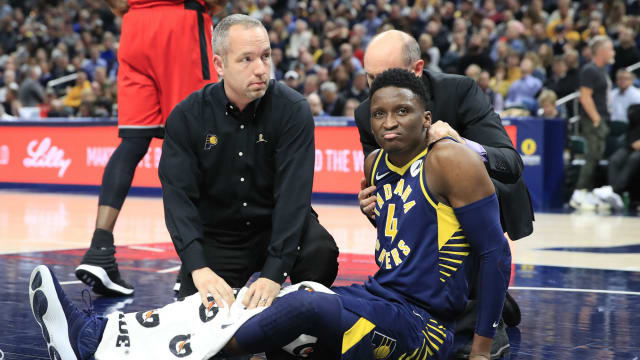 Thaddeus Young is ready to step up and lead the Indiana Pacers in Victor Oladipo's absence after the guard suffered a "serious" knee injury in Wednesday's win over the Toronto Raptors.

Oladipo had to be taken off the court on a stretcher in the second quarter at the Bankers Life Fieldhouse after collapsing while chasing down Pascal Siakam.

The Pacers confirmed the 26-year-old would undergo an MRI scan on Thursday to discover the extent of his injury, with reports suggesting he could miss the rest of the season.

In his absence Young came to the fore with 23 points, a season-high 15 rebounds and three assists in the 110-106 win over the Raptors, the 30-year-old also blocking two shots and making two steals.

And he has no problem picking up the baton from Oladipo as the Pacers eye a playoff place.

"I have to be a leader each and every day, and that's what I'm going to try to do," he said.

"Lead these guys into battle each and every night and make sure we come out with a win."

Prayers up to my brother @VicOladipo#Familypic.twitter.com/05Dd3wLJMA

"That's our captain," he said of Young - who shares the player-elected honour with Oladipo.

"He's been doing things like that all season long. Tonight he knew that we needed a lift from someone. He just took over.

"He was defending, he was rebounding, knocking down shots, doing it all. Communicating with the guys in the huddle [about] things we needed to do to stay together.

"He kind of willed us to this win. He pretty much did everything tonight."

When asked about Oladipo, McMillan added: "That kid has a beautiful spirit about him. He's one of the, if not the, most positive guy on this team.

"He always tries to lift his team, lift us. We've got to lift him now and support him."