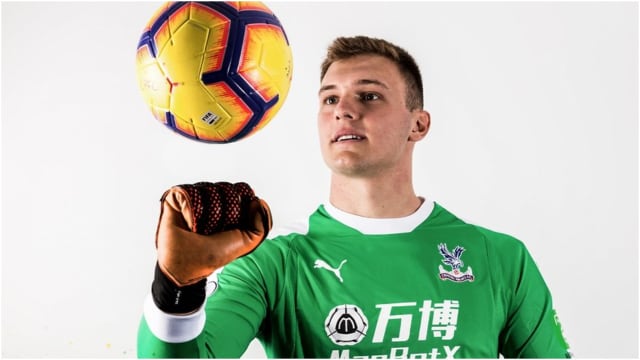 Crystal Palace have announced the signing of goalkeeper Lucas Perri on loan from Sao Paulo until the end of the Premier League season.

Perri boosts the Eagles' goalkeeping options after veteran Julian Speroni made a terrible error in Palace's 4-3 loss at Anfield on Saturday.

Palace also have an option to complete a permanent deal for the 21-year-old, who is determined to take his chance at Selhurst Park.

"Two months ago, I knew [about] the possibility to join Palace. Since then, I was pretty anxious to be here because I really wanted that.

"It's huge, it's a really important thing to me. It's the opportunity of my life and I'm going to do whatever it takes."

Perri becomes the latest Brazilian goalkeeper in the Premier League after Alisson and Ederson have impressed at Liverpool and Manchester City respectively.

"I grew up in Sao Paulo [in a city] called Campinas and I started to play aged 14 for Preta Bridge in my hometown," he added.

"I played there for four years and then moved to Sao Paulo and I played for them, now I'm here! Sao Paulo is a massive club in Brazil, it's the top club.

"Since I was a kid, since I was four, I liked to play in goal. I'm six foot, five inches - I was always the tallest in school classes! Rogerio Ceni was my hero, a goalie who could score goals! I started to play because of him.

"Brazilian 'keepers have always been good, always. 10 years ago, they started to play here and they've had great success. Alisson and Ederson are inspirations for me and I hope to get close to them."

Palace goalkeeper Wayne Hennessey was charged by the Football Association on Wednesday after the Wales international made an alleged Nazi salute in an Instagram post.