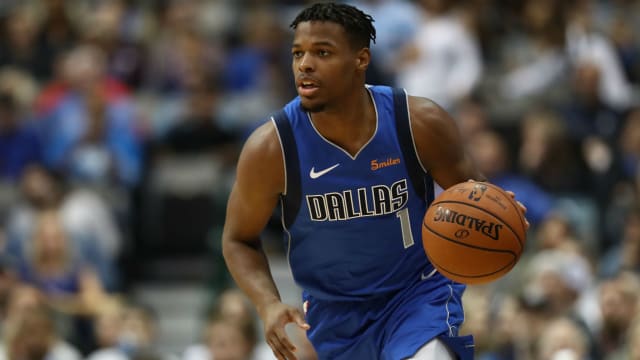 The Mavericks and Los Angeles Clippers had yet another heated matchup in the NBA and Dallas came out victorious once more.

Last time these two teams met in Dallas, Dennis Smith Jr. had his tooth knocked out by Patrick Beverley. The Mavericks won that game, and they were victorious once again on Tuesday, claiming a 106-98 victory.

The Clippers did not turn the ball over much, but the opposition capitalised at all the right times. Dallas converted Los Angeles' eight turnovers into 23 points.

Harrison Barnes led all scorers with 20 points. Luka Doncic and Smith each chipped in 17 points. Smith had missed the past six games because of a back injury and illness while also being at the center of trade rumours.

The Clippers were ice-cold, shooting just 36.3 per cent from the field. Beverley led Los Angeles in scoring with 16 points.

Marvin Bagley led all scorers in his first career start, totalling 22 points and 11 rebounds in the Sacramento Kings' 120-105 loss to the Toronto Raptors.

Russell Westbrook recorded a triple-double with 29 points, 10 rebounds and 14 assists to help lead the Oklahoma City Thunder past the Portland Trail Blazers 123-114.

Karl-Anthony Towns put up 25 points, 18 rebounds and seven assists in a 118-91 blowout win for the Minnesota Timberwolves over the Phoenix Suns.

Josh Jackson scored a season-high 27 points and had 10 rebounds for the Suns.

Luka Doncic used a crafty behind-the-back dribble to find his way to the rim.

Westbrook tried to tear the rim down with a tomahawk slam.

Indiana are just behind Toronto in the Eastern Conference. The Raptors won their last game in Bankers Life Fieldhouse, 121-105, but the Pacers have been especially disruptive on the defensive end lately. Toronto are 2-0 against Indiana so far in 2018-19.