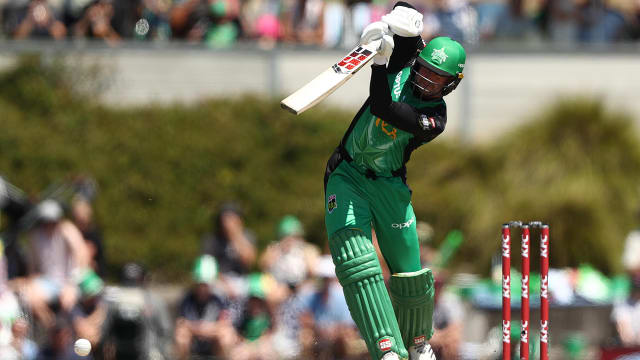 Ben Dunk led the Melbourne Stars to a 44-run win over the Adelaide Strikers to boost their Big Bash League finals chances on Wednesday.

Dunk made an unbeaten 72 off just 53 balls, combining for a 113-run opening stand with Marcus Stoinis (53).

The pair helped lead the Stars to 167-2, which proved far too much for the Strikers in Moe.

Adelaide were bowled out for just 123 in reply, the result lifting the Stars into fourth in the table.

Stoinis (3-20), Liam Plunkett (3-21) and Dwayne Bravo (3-22) did the damage with the ball for the Stars as the defending champions slipped to a sixth defeat of the competition.

His team sent in to bat, Dunk quickly made Adelaide regret that decision.

The left-hander was dropped on 30 by Michael Neser as the Stars put on 81 through the first 10 overs.

That gave them a platform to build from and Dunk ensured he was there at the end, later joined by Peter Handscomb (36 off 22).

The Strikers were patient early, but lost a wicket in unlucky fashion to begin the fourth over.

Alex Carey (30) drove Jackson Bird, who got a hand on the shot to run out Jake Weatherald (3) at the non-striker's end.

Oh no! Jake Weatherald has been dismissed in the most unlucky way imaginable! #BBL08pic.twitter.com/mv8vMZSrUh

Adelaide managed to steady but needing 97 off the final 10 overs proved too much.

Adelaide were 75-2 through 11 overs, the required run rate over 10 but with wickets in hand.

However, they lost wickets in six of their final nine overs, with Jake Lehmann (40 off 32) the big departure.

Liam Plunkett had his radar in tune this afternoon!  #BBL08pic.twitter.com/QzOb7DX7Rc