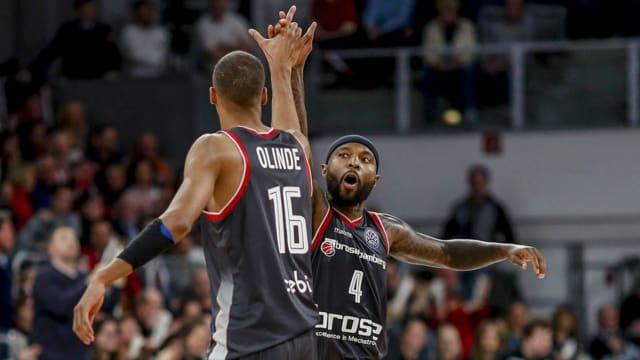 Reigning champions AEK joined Brose Bamberg in securing qualification from Group C for the last 16 of the Basketball Champions League.

AEK's 10th win of the campaign, which put them back ahead of Hapoel Bank Yahav Jerusalem in the round-robin phase, came courtesy of a 90-82 triumph over Montakit Fuenlabrada.

For Bamberg, a nervy 82-78 victory against Telenet Giants Antwerp got the job done.

Tyrese Rice starred for the German side, scoring 11 points in the final quarter to take his overall tally to 24 in a stellar showing.

Tyrese Rice had 11 of his 24 points in the closing quarter, sending @BroseBamberg to the Round of 16 with two Gamedays to spare! #BasketballCL

PAOK dished out a 94-43 thrashing to Opava in Group B, where Iberostar Tenerife wrapped up qualification by downing UNET Holon 88-77, with already-qualified Segafredo Virtus Bologna beaten 71-70 by Besiktas Sompo Japan after Kevin Punter missed a three-pointer at the buzzer.

Neptunas Klaipeda, who lost their last home game to Filou Oostende, bounced back with an 82-74 win over Group D's rock-bottom side Petrol Olimpija.