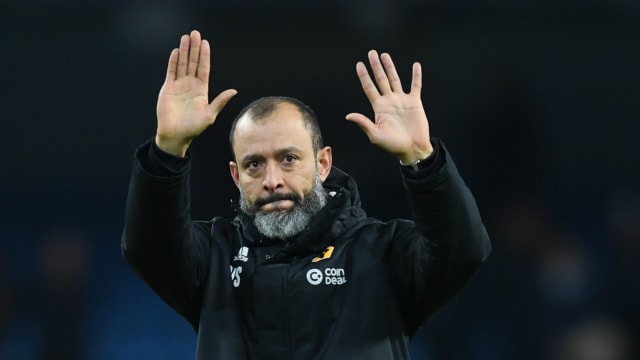 Wolves head coach Nuno Espirito Santo has been fined £8,000 by the Football Association (FA) over his celebrations during Wolves' dramatic Premier League win against Leicester City.

Diogo Jota's late goal secured his hat-trick and a 4-3 victory in a thriller at Molineux on Saturday, Nuno marking the strike by celebrating with his players on the field.

The FA charged the Wolves boss with misconduct over the incident and the Portuguese accepted the standard penalty, the body confirmed on Tuesday.

As Nuno has not been given a touchline ban, he is free to lead Wolves from the dugout in their next Premier League game, at home to West Ham on January 29.

Wolves manager Nuno Espírito Santo has been fined £8,000 after he admitted an FA improper conduct charge and accepted the standard penalty. It concerned his behaviour in the 93rd minute of the game against Leicester on 19 January 2019. pic.twitter.com/8H5IB0SUC2

Nuno was dismissed by the match official and accepted it was the right decision to send him off after he encroached on to the turf.

"I was sent off, rightly so. You cannot go on the pitch," he told Sky Sports.

Liverpool manager Jurgen Klopp was also fined £8,000 by the FA in December after running on the pitch to celebrate a late winning goal in the Merseyside derby.

After Divock Origi profited from Jordan Pickford's error, Klopp ran on the field to hug goalkeeper Alisson, subsequently landing himself in trouble.