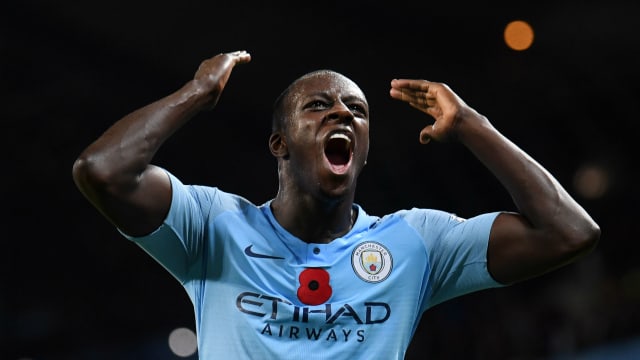 Benjamin Mendy could make his Manchester City return from a knee injury in Wednesday's EFL Cup semi-final second leg against Burton Albion, with Pep Guardiola acknowledging he has missed the Frenchman.

Left-back Mendy missed most of last season after rupturing the cruciate ligament in his knee, and then had to have surgery on his meniscus in November after starting the season well.

Mendy last played for City on November 11, the 3-1 derby win over Manchester United, meaning Guardiola has generally had to play players out of position to ease the loss.

City travel to Burton on Wednesday having won the first leg 9-0 in Manchester, and Guardiola is expected to ring the changes, with Mendy part of the group heading to the midlands.

"He [Mendy] is in the squad tomorrow [Wednesday], yes, he travels with us, maybe [he will be on the bench," Guardiola told reporters.

"The results say what we have done, I would say they say we have not missed him much, but I would say I miss him a lot.

"He is unstoppable, especially in the last third. He's so clever. He doesn't cross to just cross, he's clever.

"I have the feeling he gives us extra. Hopefully in the last part of the season the club can use him."

Kevin De Bruyne is also among those heading to Burton and will feature in some capacity as he continues to build up his fitness, while some of City's younger players look set for a run-out, with Phil Foden included.

We believe he has incredible potential for us. He's not scared to play, even in tough moments.

Tomorrow is a chance for him to show us how good he is.

Goalkeeper Arijanet Muric, just 20, has featured in four EFL Cup games this season and is set to feature again on Wednesday, and he is very highly rated by Guardiola.

"He has incredible potential as a goalkeeper," Guardiola said. "He's so big, tall, fast, and not scared. He can show how good he is [against Burton]."