Anthony 'can only make' a team better, says Iverson 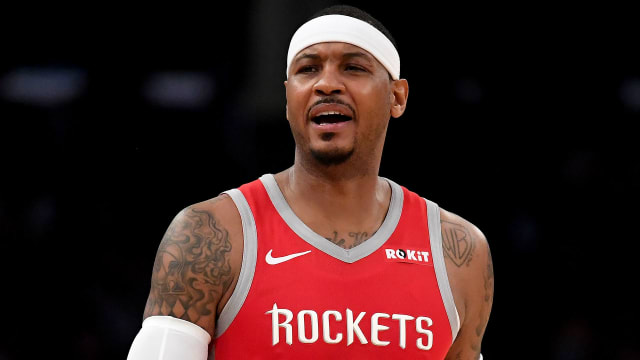 Allen Iverson thinks Carmelo Anthony deserves another chance to play in the NBA.

Anthony appeared in just 10 games for the Houston Rockets this season before he was traded to the Chicago Bulls this week.

But, Chicago do not plan to play the 34-year-old forward, either, as they will either waive or deal him before the trade deadline.

Iverson – a 2016 Naismith Basketball Hall of Fame inductee – wrote on Tuesday on Instagram he still believes Anthony can be a contributor.

"With all due respect, he can only make your team better," Iverson captioned a photo of Anthony.

With all due respect, he can only make your team better!!! #CarmeloAnthony #HallOfFame

Anthony averaged 13.4 points and 5.4 rebounds during his time with the Rockets. The Los Angeles Lakers reportedly could be interested in adding him if he clears waivers and they have an open roster spot.

The 10-time All-Star spent last season with the Oklahoma City Thunder before he was traded to the Hawks in mid-July in exchange for a package centred around Dennis Schroder. He was bought out by Atlanta, then signed with the Rockets.

Iverson, who last appeared in an NBA game in 2010, averaged 26.7 points per game over 14 seasons with the Philadelphia 76ers, Denver Nuggets, Detroit Pistons and Memphis Grizzlies. He made 11 All-Star teams and won the 2000-01 MVP.

Iverson and Anthony were team-mates in Denver from 2006-08.