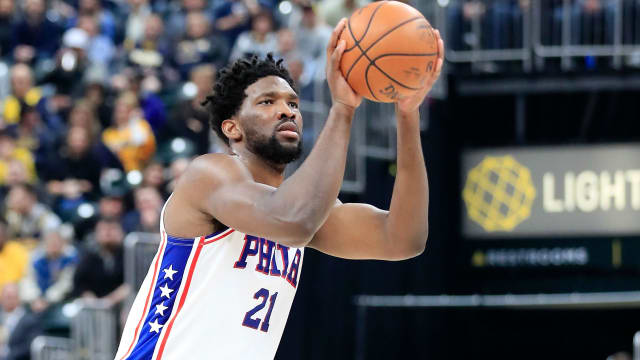 The Philadelphia 76ers had an answer for Houston Rockets star James Harden in a huge win in the NBA on Monday.

While Harden managed to have his 20th consecutive game scoring 30 or more points, Philadelphia kept him under the dangerous 40-point mark and handed Houston their largest loss of the season, 121-93.

JJ Redick and Corey Brewer added 16 and 11 points, respectively. Landry Shamet had 18 points off the bench.

Harden scored 37 points in the Rockets' losing efforts. The 2018 MVP got off to a hot start and scored 27 in the first half.

James Harden pours in 27 PTS in the opening half! #Rockets@NBAonTNTpic.twitter.com/nVVEfbw1lv

The Rockets trailed by 15 points at the half and a 13-point performance in the third quarter put Houston in a deficit they could not bounce back from.

Gerald Green chipped in 18 points off the bench. Kenneth Faried added 13 in his first game with the Rockets.

Luka Doncic became the second-youngest player in NBA history to record a triple-double. The 19-year-old rookie finished with 18 points, 11 rebounds and 10 assists in the Dallas Mavericks' 116-106 loss to the Milwaukee Bucks.

Klay Thompson set an NBA record in the Golden State Warriors' rout of the Los Angeles Lakers. The four-time All-Star became the first player to make 10 consecutive three-pointers without a miss. He finished with 44 points in 26 minutes. Thompson was 17 of 20 from the field and 10 of 11 from long distance. Golden State went on to win 130-111.

Brooklyn Nets guard D'Angelo Russell had 31 points in his team's 123-94 win over the Sacramento Kings. Russell shot 48 per cent from the field and 50 per cent from three-point range.

Nikola Vucevic used a double-double to help push the Magic ahead of the hosting Atlanta Hawks. Vucevic finished with 29 points and 14 rebounds in Orlando's 122-103 win.

The Cleveland Cavaliers' loss to the Chicago Bulls moved them to 9-39. Starters Rodney Hood and Alec Burks did not provide much help in the 104-88 rout. Hood finished with just four points on one-of-eight shooting while Burks had a lone three-pointer in 17 minutes of play.

JaMychal Green and Shelvin Mack scored little off the bench for the Memphis Grizzlies. The two finished minus-17 in Memphis' 105-85 loss to the New Orleans Pelicans.

The Mavs rookie impressed, but Giannis Antetokounmpo made sure to give Doncic his own special welcome. Antetokounmpo had a game-high 31 points in the Bucks' win.

G I A N N I S#FearTheDeerpic.twitter.com/i833p7ZNoT

No one could stop Zach LaVine. He had a game-high 25 points in Chicago's first win in the new year, including a one-handed dunk.

Kyrie Irving tallied eight steals to go along with 26 points in the Boston Celtics' 107-99 win over the Miami Heat.

When the Mavs host the Clippers on Tuesday, they will likely see the return of Dennis Smith Jr, who has missed the past five games because of a back injury and illness while also being at the center of trade rumours. He will join Doncic as they try to break Dallas' four-game losing streak. Los Angeles will enter the matchup off their first win in six games.