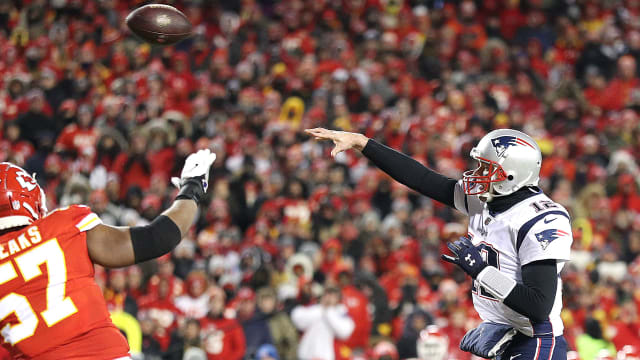 There was no "arctic blast" to freeze the field at Arrowhead Stadium, but two quarterbacks nearly 20 years apart tore up the gridiron for an exciting matchup to close out Championship Sunday.

Tom Brady and Patrick Mahomes gutted it out for a trip to Super Bowl LIII. Once again, fortune favoured the old as the Patriots won 37-31 in overtime to make this weekend the first time in NFL history both conference championship games went into extra time.

The quarterback showdown was just one of the many storylines the AFC championship brought. It was more than just a five-time Super Bowl champion against a first-year starter. It was also a coaching duel between Bill Belichick and Andy Reid, a defense in Kansas City that has piggybacked on the conference's top offense and a Patriots team that will play for their sixth championship with the help of a rookie.

The Patriots had an answer for the AFC's best offense

Belichick can win games against just about anybody. The long-time coach, with Brady in tow, has faced five number one scoring offenses and had a 4-1 record against such teams when they travelled to Kansas City on Sunday.

The Patriots used a mix of smart play calling, a strong defensive outing and playoff jitters from Mahomes to build an early advantage over the league's most powerful offense. New England shutout Kansas City in the first half, 14-0, and held the young gunslinger to just four first downs. The Patriots used pressure early and often and sacked Mahomes twice for a loss of 14 yards each time.

The second sack from Trey Flowers was on the Patriots' own 22-yard line and knocked the Chiefs out of field-goal range, all of which came after Brady was picked off in the end zone.

PICKED OFF.@reggieragland leaps for the clutch interception in the end zone! #LetsRoll

That was not going to stop arguably the greatest quarterback of all time. Brady went on to lead four more scoring drives including a touchdown in overtime.

FINAL: The @Patriots are heading to another @SuperBowl! #EverythingWeGot#NFLPlayoffs

He did all of this with the other coach-quarterback pair trailing closely behind. Reid and Mahomes made the necessary adjustments to make this game interesting. After being held scoreless, the Chiefs opened the third quarter with a touchdown. Kansas City followed with two more touchdowns and a field goal to send the game into overtime all while their defense tried to step up and stop Brady – until a costly penalty changed the course of the game.

Brady finished 30-of-46 passing for 348 yards, one touchdown and two interceptions.

Mahomes completed 16 of his 31 pass attempts for 295 yards and three touchdowns. He finished the season with 53 total touchdown passes.

A penalty cost the Chiefs a game-changing play

The flaws that follow Mahomes and the Chiefs are their defensive unit and penalties. It was these two things that cost Kansas City what could have been not just a game-changing, but a game-ending play.

The Chiefs had just retaken the lead when Brady was marching toward their end zone ready to score again. On third-and-10, a short pass intended for Rob Gronkowski was intercepted by Charvarius Ward. It would have given Kansas City the ball back with just under a minute to play. But, another defender jumped offsides and the ball was given back to Brady, who would go on to score.

But, this one really cost the Chiefs.

The Patriots have plenty of veterans with postseason experience. But, they also have an X-factor in rookie running back Sony Michel.

The 31st overall pick out of Georgia set a league record for most rushing scores in a single postseason by a first-year player (five) after scoring two touchdowns against the Chiefs. His longest was a 10-yard carry that was sandwiched in between two Kansas City touchdowns.

He finished with 113 yards on 29 carries for his second consecutive game with multiple touchdowns.

New England will need another big game from their rookie against Los Angeles in a couple of weeks. The Rams finished the regular season with the worst rushing defense in terms of yards per carry (5.1).