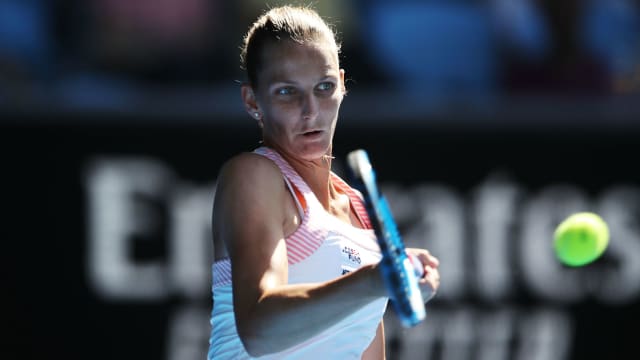 Simona Halep will have to wait and see if she retains top spot in the world rankings after her defeat to Serena Williams opened the door for a new number one to be crowned at the Australian Open.

Williams prevailed 6-1 4-6 6-4 in a pulsating battle on Rod Laver Arena, keeping alive her hopes of winning the tournament for a third time in four years.

As for Halep, the fourth-round exit leaves her in a vulnerable position, though she seemed unconcerned in the aftermath about slipping down the list so early in the season.

Naomi Osaka, Karolina Pliskova and Elina Svitolina, who all won on Monday, could replace the Romanian, along with fellow quarter-finalist Petra Kvitova.

While claiming a grand slam remains the priority for the quartet this week, success in Melbourne may come with an added bonus of dethroning Halep from the summit.

We will see you soon #AusOpen pic.twitter.com/tympHQpA9k

Blown away in the first set before battling back impressively to force a decider, Halep remained upbeat despite slipping to a ninth defeat to Williams in their past 10 meetings.

She insisted her position in the rankings is of little concern in January, with her main target to be number one at the end of the year, not the beginning.

"Well, there is another chance after this tournament to go back to number one if I lose it," she told the media.

"So the main goal is just to play as good as I can every match, to win every match I play, so the ranking doesn't really matter. And this stage for me I have to work hard to get the level back, to feel ready 100 per cent every match. So I will work for that.

"End of the year is more important, the ranking, so I will not stress myself about this. I just go home, I will rest, and I will watch tennis. I am also curious who is going to win."

Pliskova breezed by Garbine Muguruza to remain unbeaten in 2019, taking just an hour to see off the 18th-seeded Spaniard by a 6-3 6-1 scoreline.

The result was hardly a surprise - the seventh seed had only lost two of their previous nine encounters, though this was their first match since the 2017 WTA Finals in Singapore.

"I felt confident even coming to this match because I beat her so many times. I like these conditions here, I've been playing well the last couple of matches," Pliskova said after the win.

Next up is a last-eight showdown with Williams, who is chasing a 24th grand slam title.

While Pliskova had few problems in her match, both Osaka and Svitolina needed three sets to make it through to the quarters.

Reigning US Open champion Osaka had rallied from a set down against Hsieh Su-wei in the previous round and once again fell behind in her clash with Anastasija Sevastova, though she eventually triumphed  4-6 6-3 6-4.

The Ukrainian, seeded sixth, coped with both the sunshine and a Keys onsalught in a crucial third game during the final set, saving five break points on her own serve. After eventually holding, she recorded back-to-back breaks to race over the finishing line.

"It was very hard because the sun was burning my eyes, so I was very happy that I could win that game," Svitolina - who next faces Osaka for a place in the final four - said afterwards.