Genoa 0 AC Milan 2: Borini and Suso step up with Higuain left out 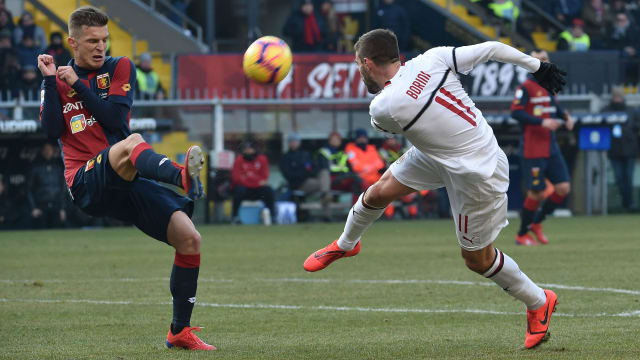 Fabio Borini and Suso stepped up in the absence of dropped striker Gonzalo Higuain, earning AC Milan a 2-0 win over Genoa at Stadio Luigi Ferraris.

Higuain was left out of Milan's matchday squad for their first Serie A outing of 2019 due to concerns from head coach Gennaro Gattuso – who watched from the stands due to a suspension – over his mindset amid links with a move to Chelsea.

Gattuso, punished for angrily confronting the referee after his side's Supercoppa Italiana loss to Juventus last week, saw the Rossoneri toil for much of the game.

Milan had previously fired blanks in successive away league matches, but Borini broke the deadlock in the 72nd minute and Suso guaranteed a return to fourth place in the closing stages.

Already without Alessio Romagnoli and Mattia Caldara at the back, Gattuso was dealt an early blow when Cristian Zapata went off injured and was replaced by Andrea Conti in the 14th minute.

Further attempts from Goran Pandev - selected in place of supsended Milan target Krzysztof Piatek - and Daniel Bessa followed, the latter seeing a shot kept out by Gianluigi Donnarumma when through on goal as Genoa took control of the contest.

Lucas Paqueta nearly fired the visitors in front late in the first half with a well-struck volley that skimmed the outside of the post, shortly after Domenico Criscito's deflected cutback was blocked by Donnarumma.

Borini saw an angled drive tipped away by Ionut Radu, while Lucas Paqueta failed to make the most of a free header before Donnarumma's double save denied Christian Kouame and Bessa.

Milan did find a way through eventually, however, as an unmarked Borini got on the end of Conti's cutback and converted from eight yards.

The Rossoneri survived a scare when Donnarumma touched Miguel Veloso's shot onto the crossbar, but Suso wrapped up the points when he latched onto Cutrone's throughball and finished off the inside of the post.