Sharapova stunned by Barty as Kvitova takes Anisimova to school 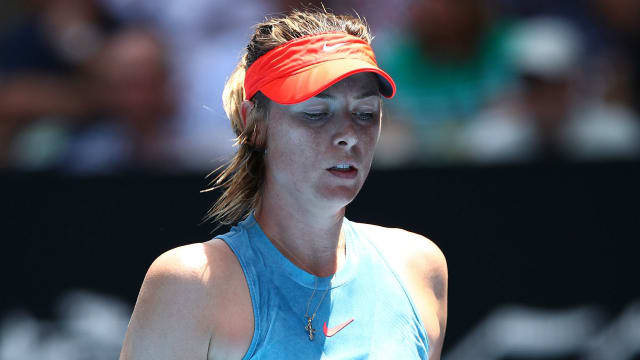 Half of the quarter-final field in the Australian Open women's singles draw was confirmed on Sunday, but the likes of Maria Sharapova and Angelique Kerber saw their campaigns ended.

Former US Open winner Sloane Stephens saw her challenge come to a halt in the fourth round too as Anastasia Pavlyuchenkova prevailed in another match to go the distance, and Petra Kvitova demolished 17-year-old Amanda Anisimova.

Roger Federer's exit to Stefanos Tsitsipas attracted much of the attention at Melbourne Park on day seven, but there was no shortage of drama and incident in the women's draw...

PAVLYUCHENKOVA FIGHTS BACK TO STUN STEPHENS

Since a run to the semi-finals in 2013, Stephens has failed to reach the second week in Melbourne but she looked on course to earn a quarter-final berth when she took the opening set against Pavlyuchenkova.

And Stephens carried that momentum into the second, breaking immediately and going 2-0 ahead before her opponent roared back and reeled off six of the next seven games to force a decider.

The final set, which began with a Stephens hold after 17 minutes, proved a topsy-turvy affair, featuring six breaks of serve, but Pavlyuchenkova had her nose in front early and the Russian advanced 6-7 (3-7) 6-3 6-3 to set up a last-eight meeting with Collins.

The world No.44 hits 46 winners to upset Sloane Stephens 6-7(3) 6-3 6-3 to advance to the #AusOpen quarterfinals for the second time. pic.twitter.com/RWvHkLtFtr

Collins had never won a grand slam match before this week, but the 25-year-old was utterly dominant in a 6-0 6-2 annihilation of Kerber, who conceded that she was well below her best.

"I think there is not too much to say. I mean, it was completely not my day," Kerber said. "I was not playing the tennis that I can play. She played really well. I think she played one of her best matches, to be honest. She hit every ball in the court. She moves good.

Still seven months shy of her 18th birthday, Anisimova produced a sensational run to the fourth round but the teenager came up against too strong an opponent in two-time major champion Kvitova, who eased through 6-2 6-1.

Anisimova took to social media after the match, admitting she was beaten by the better woman, saying: "I got a tennis lesson today, but at least it was from one of the best in the world hey...really though I had such an enjoyable week here, thank you so much for being such an amazing crowd. I am so looking forward to next year Melbs".

I got a tennis lesson today, but at least it was from one of the best in the world hey  really though I had such an enjoyable week here, thank you so much for being such an amazing crowd. I am so looking forward to next year Melbs  #believe#cloud9over pic.twitter.com/Ti3jr5CtsB

And Belinda Bencic, defeated 6-1 6-4 by Kvitova in the previous round, felt a degree of sympathy with the young American, replying on Instagram: "Welcome to the club #petrasvictims".

Next up for Kvitova is home favourite Barty, who delighted the partisan crowd by coming from behind to oust Sharapova and the Australian is hoping for revenge after losing out to the world number six in the final of the Sydney International earlier this month.

"[I need to] win a couple more important points, I suppose, compared to Sydney," Barty said. "It's exciting that I get to have another chance at Petra straight away.

"Not often does that happen where you get to kind of have a replay against the same opponent. Really exciting, but, yeah, really pumped to have another chance here."