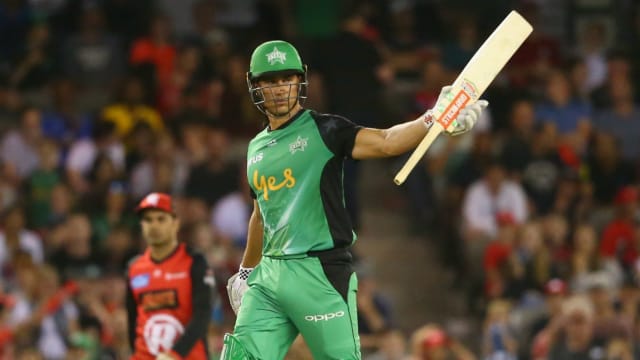 Marcus Stoinis contributed with bat and ball on his return to Big Bash League action as the Stars earned bragging rights over the Renegades with a six-wicket win in Saturday's Melbourne derby.

All-rounder Stoinis was one of a cluster of players on both teams back in the BBL after featuring for Australia in the one-day international series against India, and he was crucial in helping the Stars to just a fourth win this season.

Stonis then carried his bat with an unbeaten 70 for a fourth BBL half-century as the Stars beat the Gades for the second time this season.

Victory sees the Stars move off the foot of the table and level with fourth. The Gades, meanwhile, stay second.

Dancin’ off the bottom of the table. @DJBravo47 & the @StarsBBL take care of their cross-town rivals! #BBL08pic.twitter.com/vkdklhRcBg

The Renegades came flying out of the blocks with 30 runs in the first 18 deliveries.

However, the momentum was swiftly halted when Dwayne Bravo ran back and jumped high to take a brilliant catch with his right hand at mid-on to send Marcus Harris (15) packing off Plunkett.

Not to be outdone, in the next over Aaron Finch (14) sliced a drive off Bird and Nic Maddinson ran to his left to take a stunning snag on the ropes, clinging on when rolling to the turf.

The Gades never really recovered from there, though contributions from Tom Cooper (24), Mohammad Nabi (28) and Dan Christian (18) at least gave them something to defend.

The returning Zampa and Stoinis tore through the middle-to-lower order, the former preventing Nabi and Christian from building on starts.

Stoinis had earlier sent Cameron White back with a slower ball, before accounting for Jack Wildermuth and Cameron Boyce in the penultimate over.

With such a short target to chase, Stoinis was able to play a measured knock and he did not record a single six off his 65 deliveries.

There were seven boundaries, though, including a wonderful drive through the gap at point in the penultimate over, which followed a six clubbed over cover from Bravo, who ramped things up at the death with 17 off just nine balls face.