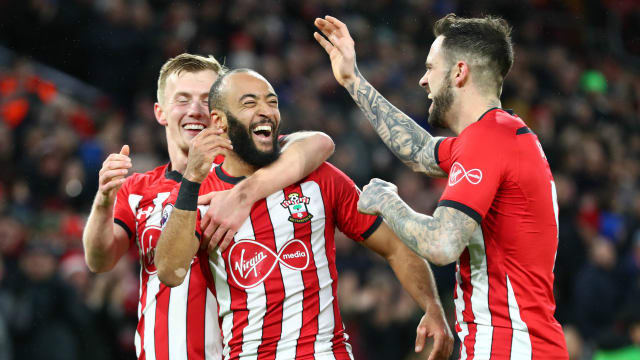 Southampton struck twice in 14 second-half minutes to secure a 2-1 home win over Everton and pull further away from relegation danger on Saturday.

The Saints, 2-1 winners at Leicester City last weekend, were on top from start to finish at St Mary's in a confident response to their midweek FA Cup exit at the hands of Derby County.

The fit-again Danny Ings was a menace throughout the first half and Everton – who grabbed a late consolation through Gylfi Sigurdsson – never came to grips with the home side's intensity, slumping to their fifth league loss in seven.

2 - James Ward-Prowse has scored in consecutive Premier League appearances for the first time in his career. Buses. pic.twitter.com/Pj2ZhMcv5E

Ings returned to Southampton's starting XI after two matches out with a hamstring injury and twice tested Jordan Pickford during the opening half hour.

The goalkeeper first reacted well to scoop away a glancing header and next parried the on-loan Liverpool man's first-time drive following Jan Bednarek's ball over the top.

There was time left in the first half for Ings to threaten once more, his determined dribble ending with Andre Gomes inadvertently poking the ball into the base of his own upright.

The breakthrough came from a less likely source five minutes after the interval as Ward-Prowse collected the ball in midfield, drove towards the edge of the area and unleashed a superb strike that flew past Pickford.

Sigurdsson did halve the deficit with a calm side-footed finish from the edge of the area in the 91st minute, but the visitors left it too late to snatch an unlikely equaliser.

What does it mean? Southampton breathing clear air

There are 15 fixtures remaining for Southampton and, on current form, they must surely be favoured to continue kicking clear of the bottom three.

Hasenhuttl has masterminded an excellent turnaround in form that has put the south coast outfit in command of their own destiny.

Bednarek brilliant at the back

Saints boss Hasenhuttl looks to have settled on a reliable three-man defence of which Bednarek is proving an increasingly important part.

The 22-year-old Poland international was a rock at the back, registering six interceptions and a game-high 10 clearances, and demonstrated class on the ball with a defence-splitting pass for Ings in the first half.

Failure in heart of Everton defence

Marco Silva, unlike his opposition manager, has reverted to a flat back-four in recent times but may ponder a change in personnel after Kurt Zouma and Michael Keane provided inadequate protection for shot-stopper Pickford.

They routinely failed to detect danger during the first half and were again caught napping when Ward-Prowse strode forward to break the game open.

Everton must switch their focus to next weekend's trip to Millwall in the fourth round of the FA Cup, while Southampton's early exit from that competition means they have extra time to prepare for Crystal Palace's visit in the Premier League on January 30.