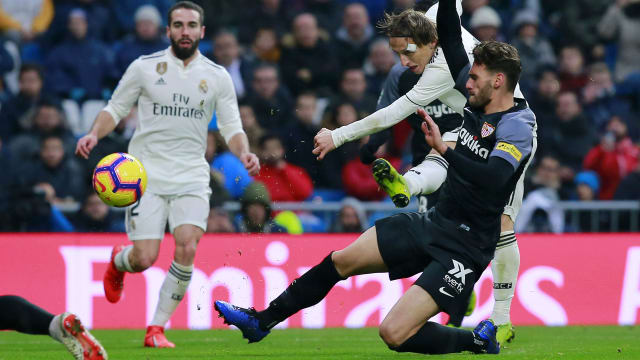 Late goals from Casemiro and Luka Modric clinched Real Madrid a 2-0 win over Sevilla at a sodden Santiago Bernabeu – a result that lifts Santiago Solari's side above their opponents in the LaLiga table.

Madrid appeared set to endure a frustrating afternoon in the Spanish capital, both Modric, who played over half of the contest with a nasty cut following a clash of heads with Franco Vazquez, and Dani Ceballos denied by the woodwork after the break.

However, Casemiro produced a sensational long-range strike in the 78th minute to help his team secure a 10th straight home league victory over Sevilla, who let slip their loose grasp of third place.

The Brazilian's curling attempt evaded Tomas Vaclik, the visiting goalkeeper only able to paw the ball into the top left corner of his net as Sevilla’s defence was finally breached in the face of a second-half onslaught from their opponents.

A wounded Modric added a second in stoppage time, converting a one-on-one opportunity as he curled his effort beyond the advancing Vaclik.

The European champions had needed an 88th-minute winner from Ceballos against his former club Real Betis last time out in the league and, back in action in front of their own fans, they made a bright start in the pouring rain.

Yet the early optimism faded as the first half wore on, Madrid fortunate Sergio Escudero failed to provide the finish at the end of a swift Sevilla counter, sending his left-footed attempt into the side-netting when confronted by Thibaut Courtois.

The hosts, though, were much improved after the break.

Modric – who swapped a bandage for a much-less obvious plaster after the interval – saw a firm drive from a tight angle deflected onto the post, while Ceballos’ effort from distance was kept out by the crossbar.

Casemiro had better luck when taking aim from outside the penalty area in the 78th minute and, with Sevilla’s resistance finally broken, the outstanding Modric made sure of the result with a calm finish in the closing seconds.