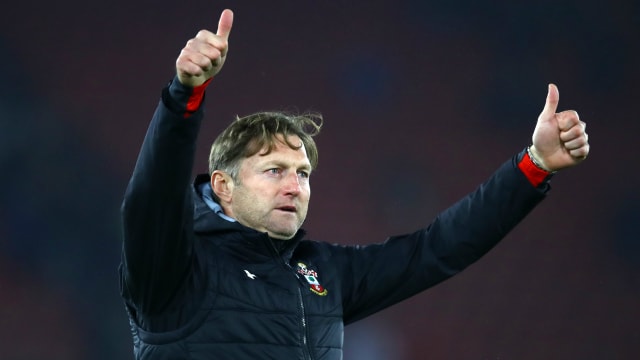 Ralph Hasenhuttl hailed Southampton's assured 2-1 win over Everton as the strongest performance of his transformative tenure.

Hasenhuttl's men cast aside the disappointment and fatigue incurred by their midweek FA Cup exit at the hands of Derby County to dominate for long periods at St Mary's.

The well-earned win, Southampton's fourth in eight league matches under the Austrian, lifted them three points clear of the drop zone and into 15th.

"It was the best game [of my time in charge] so far," Hasenhuttl told Sky Sports.

"Defensively we were good. We gave two chances away but had a lot of chances to score, it could have been four or five. It was a very deserved win for us.

"We played good football, we were good in transition and created a lot, and we were very balanced, so it was a complete team performance with the right decisions in the right moments.

"It was important to show it doesn't matter if we play on a Wednesday - we are very strong and physical. Ward-Prowse played 120 minutes [against Derby] and gave everything.

"It was important to come back with a big win. It is an important step for us and now we have three games against important opponents [in Crystal Palace, Burnley and Cardiff City]."

Southampton's triumph did not come without some nervy late moments as they were made to endure more than eight agonising minutes of added time, during which Gylfi Sigurdsson halved the deficit.

Everton never appeared likely to snatch a result despite the close final margin and Marco Silva accused of his players of timidity following a fourth loss in six league matches.

"I have already spoken to the players and given feedback," Silva said. "It is something for us to speak about more inside - Southampton were more aggressive than us.

"We have to be in a good balance and be more aggressive. Most of their chances came from when we lost the ball."