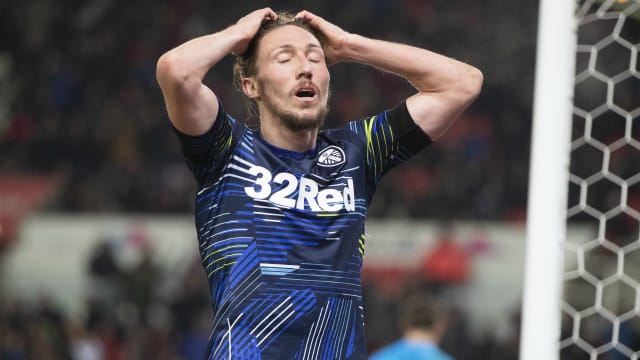 Leeds United suffered a costly 2-1 defeat to Stoke City as their lead at the top of the Championship remained at one point.

Sam Clucas and Joe Allen scored in the second half for the hosts, with Marcelo Bielsa's men only managing a stoppage-time effort from Ezgjan Alioski in response.

Leeds had been hoping to restore a four-point advantage at the summit after Norwich City beat Birmingham City on Friday.

Third-placed Sheffield United are away to Swansea City in Saturday's late game, while fourth-placed West Brom are at Bolton Wanderers on Monday.

Elsewhere, in-form Hull City were on course for a seventh straight Championship win, only for Aston Villa to recover from two goals down to draw 2-2.

Middlesbrough, who sit fifth, were held to a draw by Millwall, and the two sides directly below them both won with Derby County beating Reading and Bristol City triumphing at Nottingham Forest in Martin O'Neill's first game in charge of the hosts.

Brentford, Sheffield Wednesday, Preston North End and Blackburn Rovers were the other sides to taste victory.

Bielsa and 'Spygate' has attracted all the media attention over the last fortnight, but Leeds' results have taken an alarming dip.

Leeds have lost four of their last five matches across all competitions. As well as Norwich closing in, they are only 10 points clear of Bristol City in seventh as the sides below them crank up the pressure.

The latest defeat, which saw, Nathan Jones earn his first win as Stoke boss after losing his opening two games at the helm, came courtesy of Clucas and Allen scoring either side of a red card for Pontus Jansson for a second bookable offence due to pulling back Benik Afobe.

How does that feel, gaffer?#SCFCpic.twitter.com/MzaYucAx5h

HULL'S RUN OVER AS BORO SLIP UP

Hull had won six straight league matches before travelling to Aston Villa, but they lost ground on their rivals for a play-off place after failing to hold onto a lead at Villa Park.

Jarrod Bowen's 10th goal in his last nine games and a strike from Evandro had Hull in complete control. But James Chester's header just before half-time changed the momentum, and Tammy Abraham equalised in the 64th minute, his 17th of the campaign.

Middlesbrough needed a last-minute penalty from Jordan Hugill to salvage a 1-1 draw at home to Millwall, but still missed the chance to move above West Brom.

Derby and Bristol City did what they needed to do to close the gap on Boro, the Rams following up their FA Cup penalty shoot-out win over Southampton by beating Reading 2-1.

In the first half, Harry Wilson scored one and set up another, which was scored by Duane Holmes. Sone Aluko replied for the Royals after the break but the hosts' tiring legs held on.

There was a sell-out crowd at Forest to welcome back their former European Cup winner O'Neill, but his first game in charge was spoiled by Famara Diedhiou, whose 70th-minute effort to cap a neat team move gave Bristol City a 1-0 win.

A warm welcome at the City Ground for this man... #WelcomeHomeMartin@NFFCpic.twitter.com/PlYMJNQHnk

No teams in the bottom six won, with Ipswich Town losing 2-0 at Blackburn Rovers, while a superb second-half Steven Fletcher goal gave Wednesday a 1-0 home win against Wigan Athletic.

Kamohelo Mokotjo scored twice as Brentford made it seven games unbeaten with a 4-2 away win over Rotherham United, while Preston romped to a shock 4-1 win away to QPR.