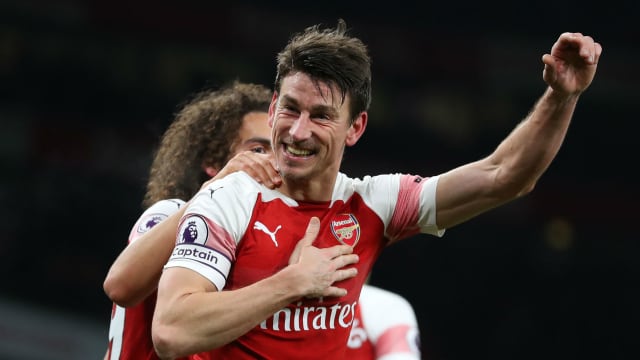 Arsenal returned to winning ways and reignited their bid for a top-four place in the Premier League with an excellent 2-0 triumph over Chelsea.

Alexandre Lacazette crafted a wonderful 14th-minute opener as Maurizio Sarri's side, not for the first time this season, wilted under the pressure of a London derby.

It was the former France defender's first goal since rupturing an Achilles tendon last season and Chelsea were unable to respond.

Sokratis powered wide unmarked from an eighth-minute corner before centre-back partner Koscielny forced a point-blank save from Kepa, who was grasping at air when Lacazette turned sharply and clipped past him at his near post.

Sead Kolasinac played Pedro haphazardly onside to almost loft an 18th-minute equaliser for Chelsea, although the left-back made himself more useful in attack with a delicate cross that Pierre-Emerick Aubameyang nearly converted with a wonderful overhead kick.

Koscielny's fortuitous conversion off his shoulder was not so picturesque but it was nevertheless rapturously received at Emirates Stadium.

Slack set-piece marking at the other end saw Marcos Alonso head against the post, pursuing a lifeline Chelsea scarcely deserved.

Chelsea enjoyed sustained possession in the Arsenal half early in the second period but created little, with Koscielny in particular defending impeccably.

Aaron Ramsey tried to prod the goal his endeavours deserved in the 64th minute after Kolasinac raided into the Chelsea box.

Blues substitute Ross Barkley had a rasping strike blocked before Arsenal made an enforced change due to Hector Bellerin collapsing with a seemingly serious knee injury - a rare blot on an outing far removed from last weekend's loss at West Ham.

What does it mean? Arsenal rejuvenate Champions League hopes

Unai Emery's side kicked off in sixth position, having fallen behind a revitalised Manchester United. Defeat would have left them nine points shy of Chelsea in fourth, meaning their lightning start to the match was fuelled by the pressure of having no margin for error. Maurizio Sarri is now the coach who will face further questions over his own prospective revolution at Stamford Bridge, with this defeat sharing far too many commonalities with the limp surrender to Tottenham at Wembley in November.

Juve-bound Ramsey will be a huge miss

Mesut Ozil looked on from the bench and was barely missed. When things click in this manner, it is easy to imagine Emery's Arsenal operating without the gifted German playmaker. However, if Ramsey's heavily touted switch to Juventus goes through the Wales midfielder will leave a considerable hole. A bundle of high-intensity, high-quality energy as the Gunners laid siege to their rivals during the first half, Ramsey rendered Chelsea's deep-lying playmaker Jorginho entirely ineffective and laid the foundations for a superb victory.

Lacazette's two touches to engineer room for a precision finish were an immaculate example of centre-forward play. Talents such as his and Aubameyang's are ones Sarri is unable to call upon, explaining his pursuit of Gonzalo Higuain. However, Eden Hazard's truculent efforts to fill the gap in Chelsea's attack speak ill of a player with ambitions to be considered among the best in the game. He was entirely ineffective once again, operating in a position that Lionel Messi redefined on his way to become the premier player in world football. No one is asking Hazard to hit Messi's levels, but he should view chances at the centre of Chelsea's forward line as an opportunity, not an inconvenience.

Sarri gets another chance to tackle a high-profile London derby in Thursday's EFL Cup final second leg, where Spurs take a 1-0 advantage to Stamford Bridge. Arsenal host Manchester United in the FA Cup a day later.