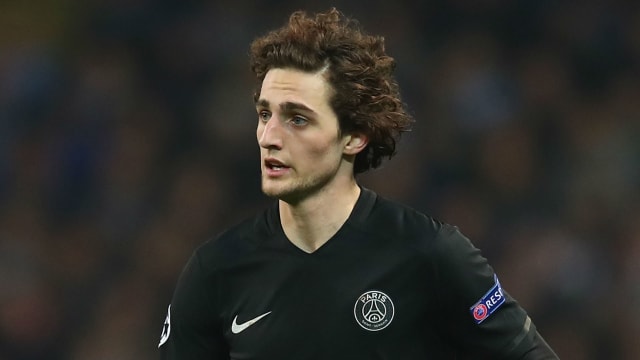 Thomas Tuchel has confirmed Adrien Rabiot is not available for selection due to his contract stand-off at Paris Saint-Germain.

Rabiot has refused to sign a new deal at the Parc des Princes and, as it stands, will leave on a free transfer at the end of the season.

PSG president Nasser Al-Khelaifi is reportedly furious at the stance taken by the France midfielder and ordered he train with the reserves, ruling him out of contention for the first-team squad.

Speaking ahead of Saturday's Ligue 1 clash with rock-bottom Guingamp, Tuchel said: "I have to prepare my team for Guingamp and it will be a team without Adrien Rabiot.

"I respect the club's decision. And it is a decision of the club."

Rabiot has been linked with Barcelona and Chelsea and appears certain to depart the Ligue 1 champions, leaving Tuchel with a hole to fill in his squad.

Julian Weigl, a player Tuchel knows well from their time together at Borussia Dortmund, has been mentioned as a replacement but the German refused to fuel the speculation.

"Weigl? I can't talk about players who are at another club," Tuchel added.

"Julian was one of my players, but he belongs to Dortmund. We're working hard to recruit a defensive midfielder.

"Fourteen days is not long but I trust we can recruit the players we need."

PSG's only domestic defeat this season came at the hands of Guingamp in the Coupe de la Ligue nine days ago and Tuchel confirmed he would select his strongest XI at the weekend before making changes for the Coupe de France clash with Strasbourg on Wednesday.

The Parisians hold a commanding 13-point lead at the top of the table as they seek a sixth Ligue 1 crown in seven years.