Kohli: No one more committed to India than Dhoni 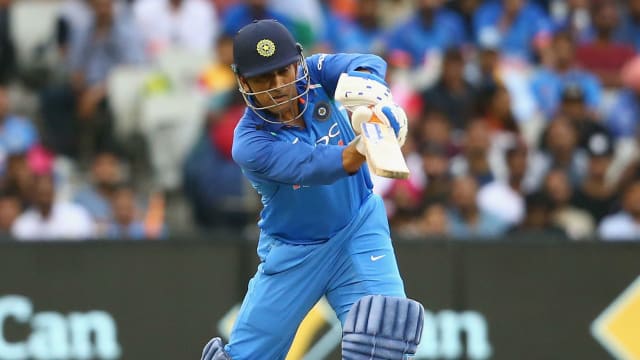 India captain Virat Kohli believes MS Dhoni is his country's most committed cricketer after the veteran batsman returned to form in the one-day international series against Australia.

Dhoni's place in the Indian batting line-up appeared under threat ahead of the World Cup after he accrued just 275 runs in 20 ODIs in 2018, failing to post a half-century in any of his innings.

However, since the turn of the year, Dhoni has looked more like his old self, scoring 193 across three ODIs against Australia.

The 37-year-old was his nation's leading run-scorer in the series, which India won on Friday with a seven-wicket victory having chased down Australia's 230 with four balls to spare in Melbourne.

Dhoni registered an unbeaten 87 and Kohli was delighted to see India's number four back in the runs.

"I think firstly as a team we are very happy for MS," Kohli said.

Another Trophy in the cabinet. 2-1
Jai Hind #TeamIndia#AUSvINDpic.twitter.com/oq101deoed

"That he is amongst the runs, because it is very important to get runs under your belt to get that rhythm and get that confidence back, especially when you have not been playing so much international cricket.

"From that point of view it is a great thing that he has come here and scored in all three games, and we feel that he will definitely build on this performance in this series, from hereon in New Zealand and back home as well.

"He will feel pretty confident about his rhythm as a batsman and every batsman needs that - whether it's a domestic or international game, you need runs next to your name to gain confidence also.

"As a team we are very happy and he must be very happy that he is amongst the runs and that he is feeling confident about his game again, which is very important for a batsman.

"Many things happen on the outside, people say a lot of things, but as an individual we know that there is no one more committed to Indian cricket than MS Dhoni and people should let him have his space because he has contributed so much for the nation.

Great series win and a total team performance. So happy to finish the tour on a high. Jai hind  #AUSvINDpic.twitter.com/zkLK0ykRqu

"They should let him figure out things on his own and what he needs to do. He is one of the most intelligent cricketers and he is not someone who is not aware about what needs to be done. As a team we are totally in sync with what he is doing and we are all very happy for him."

The ODI success concluded a successful tour of Australia for India, who had won their first ever Test series against the Aussies prior to their limited-overs fixtures.

Skipper Kohli was quick to defer praise to his team-mates, noting how there were key contributions from several players in the India side.

"Captaincy is not a thing that is individually controlled - your team is what makes you look good as captain," he added.

"From that point of view I am really pleased that we have been able to do something that has never been done before. We are going from Australia unbeaten and it's been a wonderful time and it has been a great tour for us."