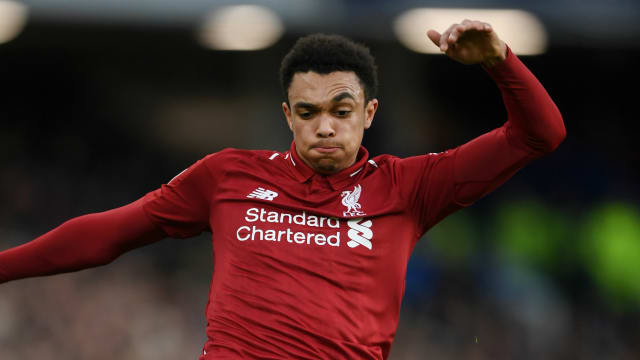 Jurgen Klopp suggested Trent Alexander-Arnold may be fit to face Crystal Palace after describing the defender as unbelievable for playing through the pain barrier against Brighton and Hove Albion.

Full-back Alexander-Arnold hurt his knee in the warm-up but was able to complete the full 90 minutes as Liverpool ran out 1-0 winners thanks to a Mohamed Salah penalty.

Georginio Wijnaldum also featured against the Seagulls despite carrying an injury and Klopp indicated he is hopeful both players could be available when Palace head to Anfield on Saturday.

"Gini and Trent we will really decide day by day - that's how it is," Klopp told reporters on Friday. "Not cool of course, but the exceptional part of the story is they both played 90 minutes.

"The whole world saw what happened to Trent but the boy - unbelievable really. He played that game and after we got the information that he had pain and yeah. No [not worse], nothing happened during the game. He's all stable, all good.

"Just before the game and adrenaline obviously is an interesting thing, it gives you opportunity to do more than you expect. So that's cool, but we will see. Both are for sure really close for [Palace] but we don't want to close any doors before anyone tells me we have to.

"Slightly different but Dejan is much better, it's a muscle thing and he needs time but I am pretty sure he will be involved again against Leicester [on January 30]. We have a few more.

"Adam trained yesterday and the day before so he should be in contention, we have to see. How he reacted in the two sessions, not tough but we did a little bit so we have to see that.

"Joe - no. Improving, improving, improving - we hope that it will be quick from now on but we don't know exactly. Joel is training completely normal for around 10 days which is good. Any others are a bit more long-term."

Klopp confirmed Rhian Brewster will not be ready to return this season but he expects Alex Oxlade-Chamberlain to be available for selection before the end of the campaign after recovering from a knee injury.

"Obviously he's on a very good way but he'll still take a couple... last time I think I put a little bit of pressure on the medical department but when I see him running or moving with the ball it looks, what he's doing already, it looks really good," Klopp said of the England midfielder.

"It's promising and he's close to returning but in the end it was so long out, since April, what a situation against Roma, but he will be fine. He looks completely without any problems in the moment, no swellings or any more things like that so he can really work on his fitness issues that he's obviously had from being out for a long time. But I think we will see him this season."