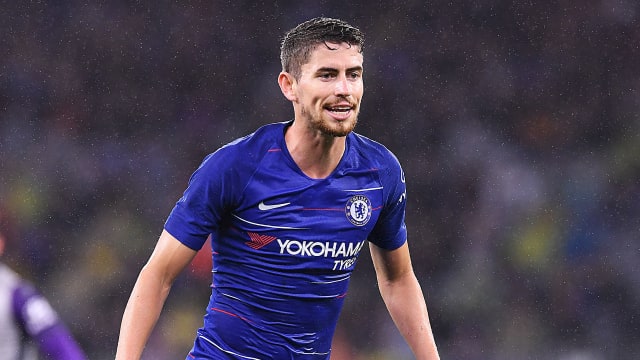 Maurizio Sarri will avoid resting a tiring Jorginho because he believes Chelsea are not ready for the tactical change the midfielder's absence would force.

Italy international Jorginho has started all but one of the club's Premier League fixtures to date and has featured 25 times in all competitions.

Cesc Fabregas' departure for Monaco has left Chelsea with no natural alternative at the base of midfield and Sarri admitted a heavy workload is beginning to affect his deep-lying playmaker.

The Blues are reportedly chasing Zenit Saint Petersburg's Leandro Paredes to provide Jorginho with relief but, for now, the 27-year-old will be asked to continue, with Sarri opposing a switch that might accommodate two holding midfielders.

"We are not ready to change at the moment," Sarri said.

"So, for the first time in the last four months, we had time to try to improve. So it's not easy in this situation to improve a lot in such little time.

Sarri says he doesn't know anything about the transfer market because his sole focus is on preparing his team for matches right now. He adds that he has told the club where he feels we need improvements. #ARSCHE

"Jorginho has played with me for four seasons. It's very difficult for him to improve more. He played very well for 20 matches, I think.

"Now, maybe, in the last two matches he was a little bit tired. He moved the ball a little bit slowly than before. But I think that it's normal.

"You cannot stay at the top for 60 matches, so it's normal to have a different period, a period when you are not so lucid as usual. But it's not a big problem. Of course, it's the reason I said we needed a replacement for Cesc."

Chelsea could secure at least one new arrival in the near future with Gonzalo Higuain, on loan at AC Milan from Juventus, believed to be on the cusp of swapping San Siro for Stamford Bridge.

The striker flourished under Sarri at Napoli but the Blues boss distanced himself from being a factor in the success of transfer market moves, insisting his position does not rely on the effectiveness of new arrivals.