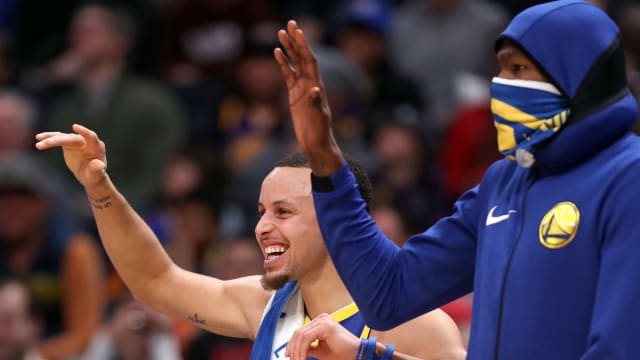 The defending NBA champions claimed a fifth straight win in style on Tuesday as they thumped the Nuggets, who had previously been atop the Western Conference, 142-111 on the road.

Not only were their 51 first-quarter points an NBA record, but the 10 three-pointers they made in the opening period set a franchise record for field goals from beyond the arc in a quarter.

They now lead the West by half a game from the Nuggets, leaving head coach Kerr to revel in an utterly stunning start to the contest.

"It's beautiful, beautiful basketball," Kerr said. "I don't remember a better first quarter. That was a fireworks show."

Guard Klay Thompson added: "Obviously, there's not gonna be very many record-setting quarters every night. But it shows you what we're capable of when we're hitting on all cylinders. It's beautiful to watch, and it's more fun to be a part of."

Asked if this performance was about sending a message to the upstart Nuggets, Kevin Durant replied: "I think they know who we are."

No Dubs team has ever made 10 threes in a quarter -- until now.

Stephen Curry was more elaborate when faced with the same question, saying: "We've been paying attention. We know who's been playing well - and to be honest, we haven't played as well against the playoff teams in the West.

"We wanna kinda correct that going into the last half of the season. So, this is a big night for us to continue to build momentum. We want to be able to carry this and put a nice little streak together, and we're doing it."

It is a particularly ominous time for the Warriors to be finding form, with Golden State poised to add All-Star center DeMarcus Cousins, whom they signed to a one-year deal in the offseason, to the mix against the Los Angeles Clippers on Friday.

Cousins has been out with an Achilles injury but his on-court debut gives the Warriors the option to field a starting five of All-Stars as he links up with Curry, Durant, Thompson and Draymond Green, who hopes his new team-mate's impact is as significant as expected.

"We'll figure it out," Green said of working Cousins into the team. "It's not rocket science. It's basketball. We just got to play good basketball, which we will... adding [Cousins] to this team is amazing.

"One of the best talents we got in this league. Definitely looking forward to it - hopefully it's devastating for everybody else."