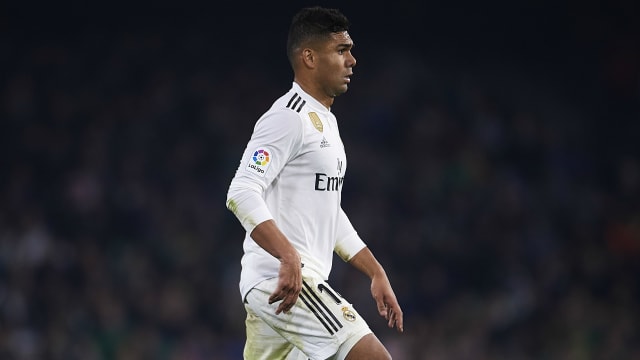 Madrid lost 1-0 at Leganes on Wednesday but still stumbled into the quarter-finals of the competition 3-1 on aggregate.

It was a disappointing outing for Madrid, who carried a 3-0 advantage into the return fixture, however, midfielder Casemiro said the Champions League holders set out to win every match amid their struggles in LaLiga.

"We lost the game but qualified, that's what we wanted. If we talk about how we played, we lacked depth in the first half but got better in the second," Casemiro said afterwards.

"We controlled the pace, their fans were boisterous but we had the game under control. We know there are no easy games, now we are concentrating on the weekend.

"We always play to win, we are not in a good place, let's be honest, but we're working hard. We're in the Champions League last 16, a bit far behind in LaLiga and now we're into the next round of the Copa del Rey. Now whatever happens we just have to win, regardless of who we face."

A defeat on the night but we're through to the Copa del Rey quarter-finals! #RMCopapic.twitter.com/70UPFYYbyf

Out-of-favour playmaker Isco was handed a rare start by Madrid head coach Santiago Solari but he struggled to impress at Butarque.

Amid uncertainty over Isco's future, Madrid defender Nacho Fernandez said: "He's a very important player for Real Madrid and continues to work hard to get back out there and display the confidence we all need, he's got the backing of the whole squad. We need Isco to be at his best, and the same goes for all of our players."

2 - Leganes are the second team to have won against both Real Madrid and Barcelona this season in all competitions, after Levante. Merit. pic.twitter.com/mWEcUm6WPi

Leganes became just the second team to beat both Madrid and Barcelona this season in all competitions, after Levante.

Mauricio Pellegrino was sent to the stands during the win, much to the frustration of Leganes' coach post-game.

"Apparently he kicked me out because I made the gesture of a pair of glasses," Pellegrino said. "But I never did it, it was an unfair expulsion.

"I'm very bitter about this. I just told him it was a penalty."