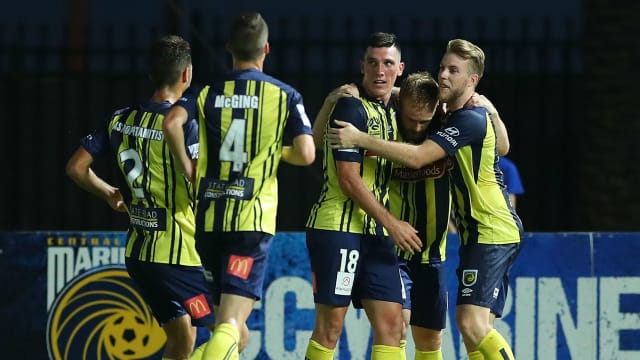 A late winner from captain Matt Simon saw Central Coast Mariners end their 10-match losing streak in the A-League with a 2-1 home victory over Melbourne City.

Lachlan Wales had seemingly secured City a share of the spoils and broken Mariners hearts 13 minutes from time by heading an equaliser but Simon struck in the 89th minute - converting the rebound after his penalty was saved - to earn a first win of the campaign at the 13th attempt.

After an even opening, Connor Pain put the Mariners in front just after the half-hour mark, producing a tidy finish into the bottom-right corner from the centre of the area following Matthew Millar's fine run and pass on the right.

City finished the first half on top, but Nathaniel Atkinson and Scott Jamieson saw chances go begging in the final five minutes.

The Mariners began the second period well and Millar almost got them a second, heading wide from a Tom Hiariej free-kick.

City were more prominent in possession, but still the better chances fell to the Mariners – Pain seeing an effort hit the post before being stopped on the line, and Jordan Murray shot wide when through on goal soon after.

And City took advantage, as Wales headed Florin Berenguer's corner in at the near post, but Mariners pushed forward again and were duly rewarded.

Simon was clumsily tripped in the box by Rostyn Griffiths, and even though Eugene Galekovic saved the initial spot-kick, the Mariners' captain made no mistake at the second attempt.