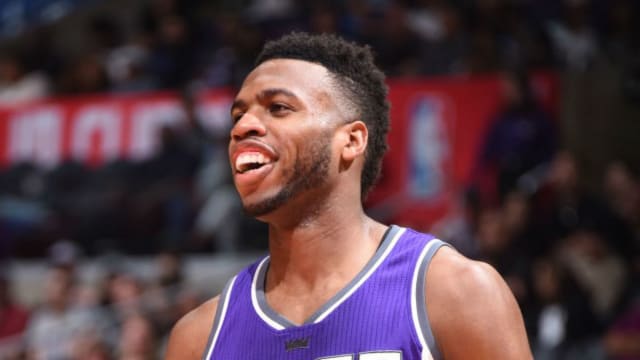 The Kings pulled off a big win against the Portland Trail Blazers in Sacramento on Monday.

Six Kings players scored in double figures in the victory. Buddy Hield paced Sacramento with 19 points and seven rebounds on seven-of-10 shooting. Bogdan Bogdanovic was right behind him with 18 points on eight-of-10 shooting.

The Trail Blazers attempted to make a comeback in the closing minutes, but missed their chance to make things closer when Damian Lillard stepped out of bounds while receiving an inbound pass with 38.1 seconds to play.

Portland dropped to 26-19 with the loss while Sacramento improved to 23-21, edging closer to the playoff picture.

D'Angelo Russell recorded 34 points and made seven seven-pointers to lead the Nets past the Celtics 109-102.

Anthony Davis tallied 46 points and 16 rebounds in the Pelicans' 121-117 win over the Clippers.

Terry Rozier only managed to score seven points on three-of-12 shooting in the Celtics' loss.

Grayson Allen delivered a big block against the Pistons.

Jaylen Brown skipped through the lane and threw down a lefty dunk on the Nets.

JAYLEN BROWN
WITH THE LEFT! pic.twitter.com/bpmgCt1RtN

The two top teams in the Western Conference are set to clash in Denver. The Nuggets have the best record in the West while the Warriors are riding a four-game winning streak. Denver's roster is riddled with injuries, but this matchup should still provide an exciting preview of a possible playoff series between the two teams.