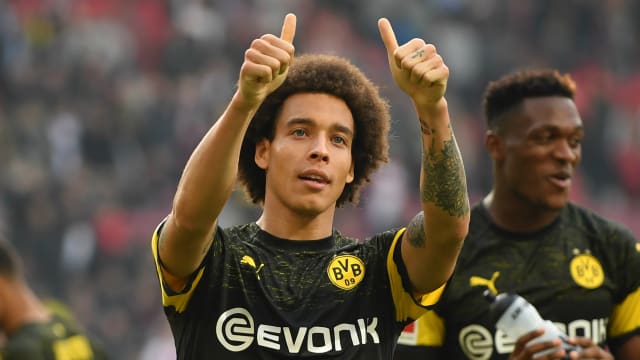 Axel Witsel wants Borussia Dortmund to keep their focus in the second half of the Bundesliga season in order to complete a "special year".

Dortmund lead Bayern Munich by six points at the top of the table at the midway stage of the campaign as they aim to end the champions' sequence of six consecutive titles.

But star midfielder Witsel is keen to guard against complacency, believing there is still plenty of work to do if Dortmund are to triumph this term.

"I am convinced that it can be a special year for the fans, the club and for us players," Witsel told Kicker. "There is a very special atmosphere around this club and you need that. We want to achieve something big.

"Now we have to tackle the second half of the season exactly as we did in the first half, one game after the other. Nothing else would bring us anything."

Bayern coach Niko Kovac has promised to push Dortmund all the way, but Witsel prefers to concentrate on Dortmund's performances.

"What else should Bayern say in their situation? We are well advised to focus only on ourselves," he said.

Of his own personal form, Witsel added: "Physically, I'm fit and, thanks to the experience of the past few months, I'm also more mature and mentally stronger than before.

"I have never felt better on the pitch than I have this season."