Hurricanes blow Stars away as Short and Meredith shine again 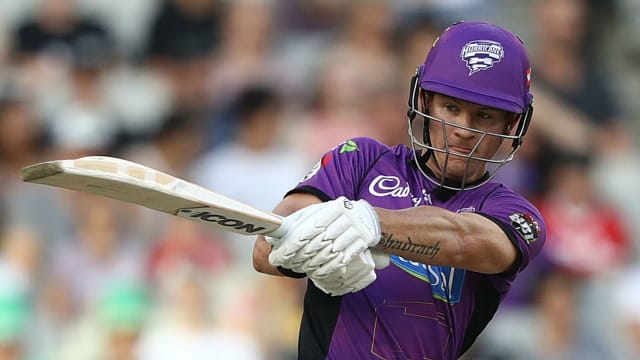 D'Arcy Short and Riley Meredith played starring roles as Hobart Hurricanes extended their lead at the top of the Big Bash League table with an emphatic 59-run victory over Melbourne Stars.

Short underpinned a healthy Hurricanes total of 185-2 at the MCG, finishing unbeaten on 96 from 57 balls and reclaiming top spot in the tournament run-scoring charts with 355.

The Stars were then skittled for 126 in reply, Meredith claiming 4-21 from four overs.

Hobart have now won six out of seven this season and boast a four-point lead at the top of the table despite having played a game fewer than their nearest challengers, while the Stars are rooted to the foot of the ladder.

What a way to victory for the Hurricanes!

Both @ShortDarcy and Riley Meredith producing some serious highlights. #TasmaniasTeam#BBL08pic.twitter.com/5JrpwnIxtp

When a batsman is in the sort of form Short is in, you really need to take every chance you get to dismiss them.

Seb Gotch missed a tough diving chance in the third over, after Short - with only three runs to his name - had top-edged a Liam Plunkett delivery.

That missed opportunity proved extremely costly as Short took charge thereafter, sharing a 95-run stand with fellow opener Matthew Wade (41) and guiding Hobart to a score that proved well beyond their hosts.

MEREDITH TOO HOT TO HANDLE

Johan Botha and Jofra Archer each claimed two wickets in the Stars' reply, but the lively Meredith was Hobart's chief destroyer.

Three of the seamer's four scalps came courtesy of short deliveries and he now has 11 wickets in the tournament - a tally topped by only two players – at an average of 18.54