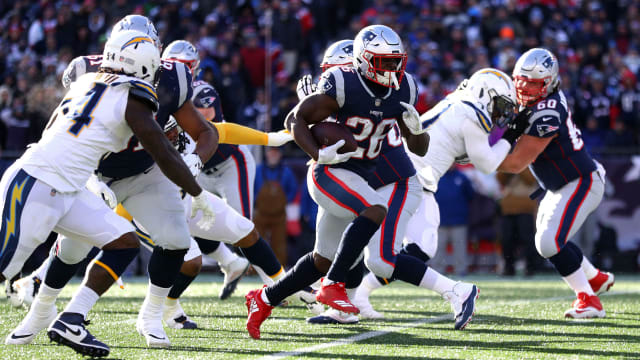 The New England Patriots are going to the AFC Championship game for the eighth consecutive year after dominating the Los Angeles Chargers in the divisional round.

Tom Brady and Sony Michel led the five-time champions to a big 41-28 victory on Sunday as the shell-shocked Chargers were blown away in the first half at Gillette Stadium.

Michel helped himself to three touchdowns as the Patriots converted five of their first six drives, with Phillip Dorsett and Rex Burkhead also on the scoresheet.

The Chargers had initially cancelled out the opening score through Keenan Allen and unsuccessfully rallied again in the second half, falling well short despite touchdowns from Melvin Gordon, Virgil Green and Antonio Gates.

Veteran star Brady, who reportedly played through a medial collateral ligament sprain this season, threw 34 of 44 passes for 343 yards and a touchdown for New England.

The Patriots can now prepare to face the Kansas City Chiefs next Sunday for a place at the Super Bowl. We pick out three takeaways from their demolition of the Chargers.

Remember those whispers earlier this season? The Patriots dynasty is nearing the end. Brady looks old. The Pats cannot match the firepower of the Chiefs or Chargers or New Orleans Saints or Los Angeles Rams.

After watching the Patriots offense dissect a good Chargers defense, all that talk sounds ridiculous.

Brady looked like vintage Brady. The offensive line opened up big holes for Michel (24 carries for 129 yards and those three touchdowns). Wide receiver Julian Edelman did what he always does, getting open and catching everything thrown his way. He had nine catches for 151 yards.

In short, this is nothing we have not seen from the Patriots many times through the years. What makes it so impressive and somewhat surprising is the talk that the Patriots could not do this anymore.

The @Patriots are on to the next... #NFLPlayoffs#EverythingWeGotpic.twitter.com/FFGizU8mef

Chargers unprepared on both sides of ball

The Chargers were a dark-horse pick by many to win the Super Bowl. With playmakers on both sides of the ball and quarterback Philip Rivers playing better than ever at age 37, this looked like it could be their year.

What went wrong? Everything. On offense, the Chargers could not stop linebacker Dont'a Hightower and frequent blitzes from the pass rush, which kept Rivers off balance all game. Running back Gordon was not a factor even before the Chargers fell too far behind to run the ball.

The Chargers did not get any pressure on Brady. They did not tackle well. Edelman and running back James White (14 catches for 98 yards) seemed to be open every time Brady looked their way. On special teams, Desmond King fumbled away a punt return in the third quarter.

Coming off a tough win at the Baltimore Ravens last week, it was asking a lot for the Chargers to go to Foxborough and win. But this poor performance was unexpected and baffling.

Chiefs against Patriots: Who ya got?

The AFC championship game could herald a changing of the guard, with the Chiefs looking to unseat the Patriots as the dominant power in the conference.

After seeing the Patriots dismantle the Chargers, the Chiefs know they will have their hands full. The Patriots defeated the Chiefs 43-40 in Foxborough in Week 6, too.

But that result means little headed into the title game. Playing in Kansas City, things will be much tougher for Brady and the offense. Michel, who rushed for 105 yards and two touchdowns in that game, will be key, as the Chiefs defense ranked 31st in the NFL this season in yards per carry by opponents (5.0).

One of New England's keys against the Chargers was stringing together long drives in the first half to keep the Chargers' offense off the field. The Pats would love to turn Patrick Mahomes into a spectator next weekend.

Mahomes passed for 352 yards and four touchdowns in that earlier game, three of those to Tyreek Hill. There is no reason to expect the Chiefs' offense will not be able to put up big numbers at Arrowhead.

That will put a heavy burden on Brady and the offense to keep pace in a hostile environment. But do not bet against Brady. He definitely silenced the critics with his performance on Sunday.

"Everyone thinks we suck and can't win any games," Brady told CBS after the game. "We'll see."