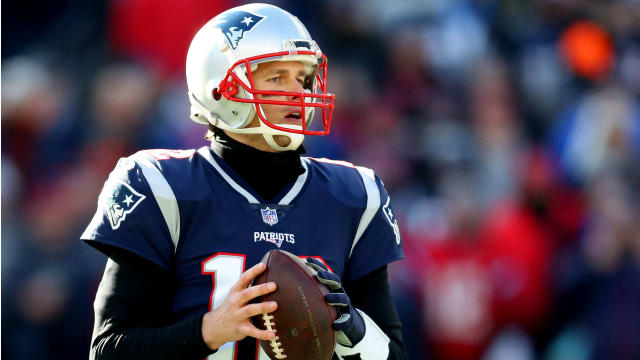 Tom Brady said "everybody thinks we suck and cannot win any games" as the New England Patriots superstar embraced the team's underdog status in the NFL playoffs.

Brady had a chip on his shoulder after the Patriots' dominating 41-28 victory over the Los Angeles Chargers in their AFC divisional playoff game on Sunday.

The Patriots quarterback and five-time Super Bowl champion was instrumental in the win, passing for 343 yards and a touchdown against the Chargers.

But immediately after the game, he shrugged off a question about next Sunday's AFC championship game against the Kansas City Chiefs, telling a CBS reporter, "Everybody thinks we suck and can't win any games. We'll see."

Even at age 41, Brady's stats this season were comparable to numbers he put up in his prime; his yards per game, yards per pass attempt and completion percentage were all higher than his career average.

But on the rare occasions when Brady did stumble, some critics chalked it up to his age, and used that as an excuse to say the Patriots' dynasty is finished.

Despite their comprehensive victory over the Chargers, and a win earlier this season in Foxborough against the Chiefs, the Patriots are underdogs entering the Chiefs clash.

It is only the seventh time in head coach Bill Belichick's reign in New England the team have been an underdog in the postseason. The Pats are 3-3 in those games.

Brady is not the only Patriot who has proudly adopted the underdog theme.

"Tom said it, so I can comment on it. Yeah, everybody does think we suck. Everybody thinks we don't have enough," wide receiver Phillip Dorsett said. "But the only thing that matters is what we think in this room and we believe. When you have a whole group of guys that believes, it can be a special thing. So we have to keep playing, keep going hard."