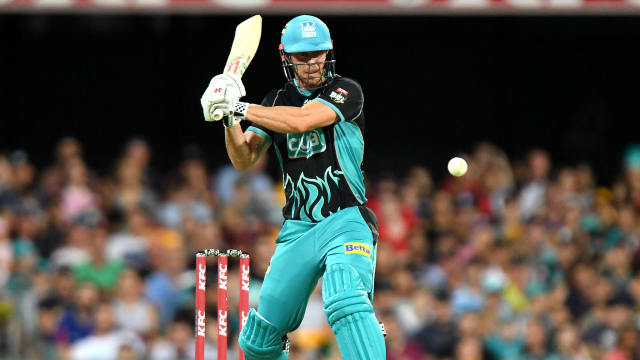 Brendon McCullum and Chris Lynn put on a show with the bat before Melbourne Renegades crumbled as Brisbane Heat romped to a 101-run Big Bash League victory.

The Heat slumped to an eight-wicket defeat against the same opponents just three days earlier, but rebounded in sensational fashion in Geelong.

McCullum and Lynn set the tone, scoring 69 and 66 respectively, in the Heat's hefty total of 192-4 after youngster Max Bryant had put on a rapid 44 off 24 balls.

And the Renegades never wilted in reply, Josh Lalor (2-12), Brendan Doggett (3-16) and Mitchell Swepson (3-22) leading the way in skittling the under-par Renegades for just 91.

It was a timely win for the Heat - their first over the Renegades since the semi-final of BBL 2 - and they are now just two points off the top four in the standings, while Melbourne are fifth with a 4-4 record.

Our first against @RenegadesBBL since the BBL|02 Semi-Final (when we ended up winning the competition)...

See you Thursday night at the Gabba against @ThunderBBL!#BringTheHeat#BBL08pic.twitter.com/w4O3NEwdKi

BASH BROTHERS LIVE UP TO THE MONIKER

McCullum and Lynn have been dubbed the 'Bash Brothers' due to their explosive exploits in the BBL and they truly lived up to the name here.

New Zealand legend McCullum battered five sixes and four fours from 43 balls, while 'Lynnsanity' was in full swing with four maximums and three fours off 44 deliveries.

Together the duo put on 89 runs for the second wicket, which took the run-rate away from Melbourne.

While the more recognisable names stole the headlines, teenager Bryant displayed his burgeoning talent as part of a 70-run opening stand with McCullum.

At one stage, Bryant racked up four consecutive boundaries with Joe Mennie conceding 23 runs off his second over.

Bryant eventually holed out off Dan Christian to deep midwicket, but it was quite the display from the 19-year-old.

Only three players made double figures in a dismal batting display from Melbourne.

Lalor did the initial damage, first having Marcus Harris caught at midwicket before Bryant took a dolly at cover point to send Sam Harper back after Doggett had removed Mackenzie Harvey.

Swepson did the damage in the middle order, accounting for Tom Cooper, Mohammad Nabi and Jack Wildermuth to leave the Renegades reeling.