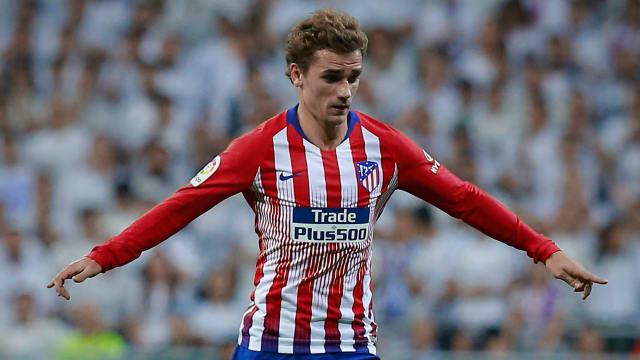 Antoine Griezmann scored for the fifth LaLiga match in succession as Atletico Madrid edged closer to leaders Barcelona with a 1-0 victory over Levante.

France international Griezmann slammed home a second-half penalty after a handball by Nikola Vukcevic for his ninth league goal of the season, sending Atletico two points behind Barca, who host Eibar later on Sunday.

Levante defeated a much-changed Barca in the Copa del Rey in midweek, but they posed minimal threat to Diego Simeone's side at the Wanda Metropolitano, only really testing Jan Oblak once in the entire match.

It was far from a vintage performance from Atletico, who have now won their last two home LaLiga matches 1-0 courtesy of a Griezmann penalty.

Griezmann was unable to convert a glorious chance from inside the six-yard box before Atletico lost Stefan Savic to a left thigh injury sustained off the ball in the seventh minute.

The hosts thought they were in front when Koke slotted home Vitolo's pass four minutes later but it was ruled out after referee Eduardo Prieto Iglesias reviewed footage of Rodrigo's challenge on Enis Bardhi in the build-up.

An excellent tackle from Rober Pier stopped Vitolo firing Angel Correa's great throughball home before half-time, while Koke and Thomas Partey kept the pressure on after the restart.

Atletico got the breakthrough in the 57th minute when Vukcevic blocked Thomas' cutback with his arm and Griezmann fired the resultant penalty into the top-right corner.

Oblak remained alert to deny Jose Luis Morales after he cut in from the left, before Bardhi was blocked by Diego Godin inside the final 10 minutes as Atletico made it 16 LaLiga matches without defeat.

What does it mean? Atletico's defensive injury woes continue

Atletico went into this match without Filipe Luis and Lucas Hernandez, who have been out since last month with hamstring and knee issues respectively. Jose Gimenez only returned from a month out with a calf problem against Girona on Wednesday and with Savic pulling up early on he may be forced into playing more minutes over the coming weeks than Simeone would have liked.

Despite being deployed alongside Griezmann in attack, Correa played with great freedom and was a thorn in the side of Levante's defence. He flitted across the front line and created five chances for his team-mates before being replaced by Thomas Lemar in the 72nd minute.

Bardhi struggles in the middle

Levante were passengers for much of the match and Bardhi did little to help their cause in midfield. He failed to hit the target with his two shots at goal and his passing accuracy was below 60 per cent.

Atletico will hope to close out their Copa del Rey last-16 clash with Girona on Wednesday, while Levante head to Barcelona with a 2-1 advantage in their tie a day later.