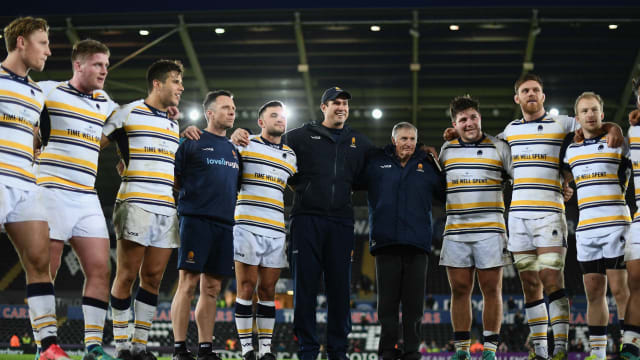 Worcester Warriors snatched a dramatic 20-18 win over the Ospreys to reach the quarter-finals of the European Rugby Challenge Cup and Clermont Auvergne beat Northampton Saints in a classic to qualify.

Stand-in captain Ryan Mills was the hero for the Premiership strugglers at the Liberty Stadium on Saturday, scoring a drop goal right at the death to put Worcester through to the last eight for the first time in a decade.

Tries from Keelan Giles and Olly Cracknell and a Luke Price penalty put the Welsh region 15-7 up at the break after Jonny Arr went over to open scoring at the other end.

The Warriors led by two points following scores from Ollie Lawrence and Dean Hammond, who crossed soon after George North was sent to the sin bin, but Sam Davies looked to have won it for the hosts with a penalty six minutes from time.

There was a final twist, though, as Mills was on target from 30 metres out, striking a huge blow to the Ospreys' hopes of qualifying from Pool 2 and putting Worcester through with one round remaining.

Clermont are assured of a home quarter-final after defeating Northampton 48-40 in a 13-try thriller at Stade Marcel Michelin, where the home side changed their strip at half-time due to a colour clash.

Teimana Harrison scored a hat-trick, but Wesley Fofana and Peter Betham claimed two tries apiece as Clermont made it five wins from five to guarantee their progress from Pool 1, leaving Northampton hoping to advance as one of three best runners-up.

It is all to play for in Pool 3 heading into the final round of matches after Connacht joined Sale Sharks on 17 points with a 20-18 home victory, David Horwitz scoring the decisive penalty in the closing stages.

Harlequins remain top of Pool 5 after Nick Fenton-Wells scored a hat-trick in a 65-9 rout of Enisei-STM, with Bennetton Treviso a point behind the leaders following their 38-24 win over Agen.