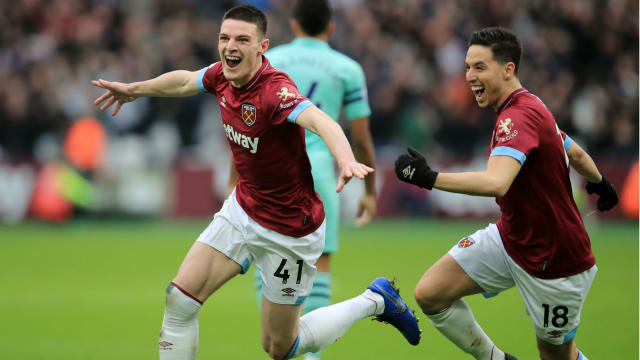 Samir Nasri impressed for West Ham as they claimed a 1-0 Premier League victory over his former club Arsenal at London Stadium on Saturday.

Nasri was making his Premier League debut for the club as he continues his comeback from an 18-month ban for receiving an intravenous treatment at a Los Angeles clinic in December 2016, contravening World Anti-Doping Agency rules.

And the former France international was a key figure for West Ham, setting up Declan Rice for the winner early in the second half.

Marko Arnautovic - linked with a move to China - waved to fans after being replaced in the second half, while Arsenal struggled to truly test goalkeeper Lukasz Fabianski in a poor showing.

Mark Noble failed to get enough purchase on a left-footed strike from the edge of the box as West Ham threatened to take an early lead but it was Arsenal who forced the first real save of the match – Fabianski providing the block after Alexandre Lacazette had exposed a hole in the Hammers' defence.

Sead Kolasinac chose to cut the ball back for Lacazette when a shot would have been the better option after the ball broke for him down the left after 23 minutes, while Nasri probably should have followed the Bosnian's example when he drilled into the side-netting soon after.

Samir plays a one-two with Arnie and then shoots wide of goal in the box. That was a real chance. #WHUARS 0-0 (26) pic.twitter.com/ZT67Lu3ftp

Nasri then teed up Felipe Anderson to fizz a low strike wide, before Matteo Guendouzi arrowed a strike just past the post from distance with Fabianski at full stretch and Declan Rice headed just off target in the closing stages of an even first half.

West Ham made the breakthrough three minutes into the second half, when a weak clearing header from Laurent Koscielny fell to former Arsenal colleague Nasri, who laid off the ball for Rice fire home from just inside the box.

Arsenal improved following the introduction of Aaron Ramsey - who is said to have agreed a deal with Juventus this week - after 59 minutes but failed to make their chances count, with Pierre-Emerick Aubameyang and Alex Iwobi missing two opportunities of note.

The Gunners had the ball in the back of the net in stoppage time, but Koscielny's header was ruled out for offside against Lucas Torreira, who crossed the ball, as West Ham held on for a first home win against the Gunners since 2006.

What does it mean? Travel sickness for Arsenal

Defeat at West Ham means fifth-placed Arsenal are now without a win in their last five Premier League away matches, losing three of those, and could now be caught by Manchester United if they pick up three points at Tottenham on Sunday. West Ham climb to eighth ahead of the rest of the weekend's fixtures.

Any doubts around Nasri's readiness for Premier League football after so long out will have at least been partially allayed by his performance on Saturday.

Some neat and intelligent touches around the box made him a central part of West Ham's attacking play and he came away with a deserved assist from his first match back in the English top flight.

Arnautovic waved off amid Chinese whispers

Nasri was replaced after 70 minutes – the same time as Arnautovic was removed after a much less impactful display.

The Austrian removed his gloves and waved to all corners of the ground as he trudged from the pitch, perhaps suggesting there is truth in the reports linking him with a move to China.

After clashes with Fulham and West Ham, the London derbies keep coming for Arsenal, who host Chelsea next Saturday. West Ham visit Bournemouth earlier on the same day.