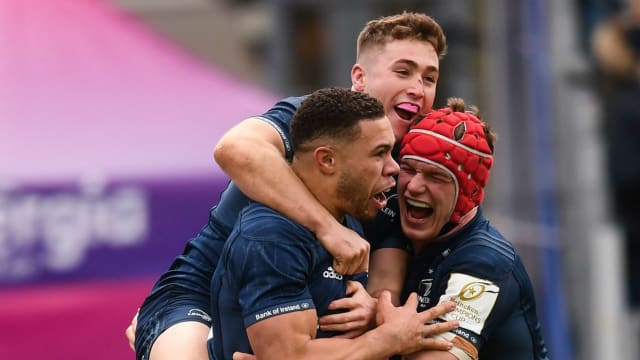 Toulouse had not been beaten since September, but Leinster ended their 100 per cent Champions Cup record with a 29-13 bonus-point victory at the RDS Arena on a great day for Pro14 clubs.

Injury-hit defending champions Leinster lost Luke McGrath to a knee problem, but lead Toulouse by three points and will be assured of a home quarter-final if they win at Wasps next weekend.

Toulouse are still on course for the last eight with a home clash against Bath to come given their points tally, but they were brought back down to earth on a windy afternoon in Dublin.

Leinster, missing Jonny Sexton and a whole host of fellow internationals, led 10-6 at the break after Jack Conan ploughed his way over from close range and three second-half tries put them out of sight.

Dave Kearney took a pinpoint cross-field kick from Ross Byrne before finishing superbly, then Sean Cronin and Adam Byrne crossed before Cheslin Kolbe touched down right at the end for a well beaten Toulouse side.

What a day! A crucial win backed by phenomenal support

We go again next week #LEIvTOU#JoinTheRoarpic.twitter.com/EDuJT37Tzq

Jacob Stockdale claimed a double as Ulster kept their hopes of securing top spot in Pool 4 alive with a 26-22 defeat of previously unbeaten leaders Racing 92 in a classic battle at Kingspan Stadium.

The prolific Stockdale maintained his record of having scored in every round, the competition's leading scorer chasing onto his own kick for a magnificent solo try in the second half in Belfast.

Simon Zebo's try reduced the deficit to 16-10 at the break and last year's runners-up were only a point behind following tries from Brice Dulin and Olivier Klemenczak, but Will Addison's second penalty completed the scoring as Ulster ground it out.

Edinburgh will head into their decisive Pool 5 clash with Montpellier with a three-point advantage at the summit after downing struggling three-time champions Toulon 28-17 at Stade Mayol.

Richard Cockerill's side rallied from 12-8 down at the interval, Blair Kinghorn and James Johnstone adding to a Darcy Graham try to keep Toulon rooted to the bottom.