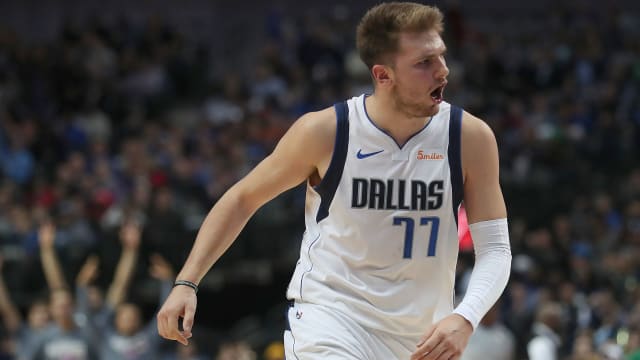 Luka Doncic starred to lead the Dallas Mavericks to a thrilling win over the Minnesota Timberwolves in the NBA on Friday.

His first shot came in the paint to give the Mavs a 112-111 lead, his second gave them a 114-113 advantage and the third was on a transition three-pointer to give Dallas a lead they would never relinquish.

The 19-year-old scored 29 points to go with 12 assists and eight rebounds to lead the way for the Mavericks.

Luka is the definition of clutch. #MFFLpic.twitter.com/jHYE7CFVfv

Rockets star James Harden stayed hot, tallying another 40-point triple-double with 43 points, 12 assists and 10 rebounds in a 141-113 win over the Cavaliers.

Nets guard Spencer Dinwiddie did not have his best game as he scored eight points on one-of-seven shooting off the bench in Brooklyn's 122-105 loss to the Raptors. Brooklyn were minus-24 with Dinwiddie on the floor.

Sabonis throws one down

Pacers forward Domantas Sabonis threw one down in the Pacers' 121-106 win over the Knicks.

The Spurs and Thunder are coming off of one of the best games of the season in a double-overtime thriller Thursday and could deliver again.