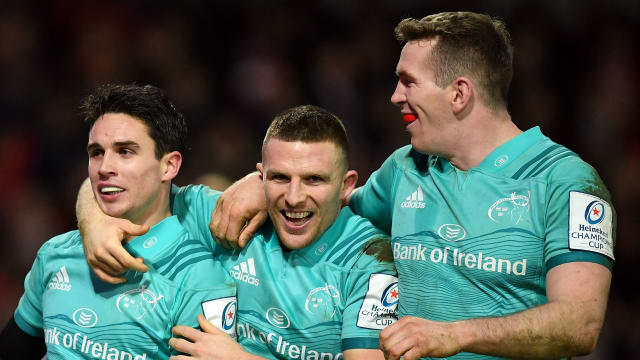 Munster produced a dominant display to secure a bonus-point win over Gloucester as they got their European Champions Cup campaign back on track.

Johann van Graan's men were beaten by Castres in the previous round of Pool 2 matches, but they built a commanding lead at the summit by completing the double over their Premiership opponents with a 41-15 triumph.

The Irish province endured a slow start at Kingsholm and did not get off the mark until Joey Carbery's 19th-minute penalty cancelled out Billy Twelvetrees' three-pointer.

But from there it was all one-way traffic, with Carbery converting his own try, kicking another penalty and adding the extras to a Rory Scannell score before the interval.

A Gloucester side featuring the returning Danny Cipriani offered greater resistance in the second half as Ollie Thorley and Fraser Balmain touched down, but Munster – beaten semi-finalists last season – were simply too strong, with Keith Earls, Andrew Conway and Carbery going over to complete the rout.

Wow! A massive bonus-point win over Gloucester at Kingsholm keeps Munster at the top of Champions Cup Pool 2!

The only sour note for the visitors was an injury for captain Peter O'Mahony, with an otherwise delighted Van Graan telling BT Sport: "I'm very proud of the lads after that performance. I thought we were clinical and I'm very happy with that bonus point.

"It's a bit early to say on Pete's involvement for next week, he'll need to be assessed."