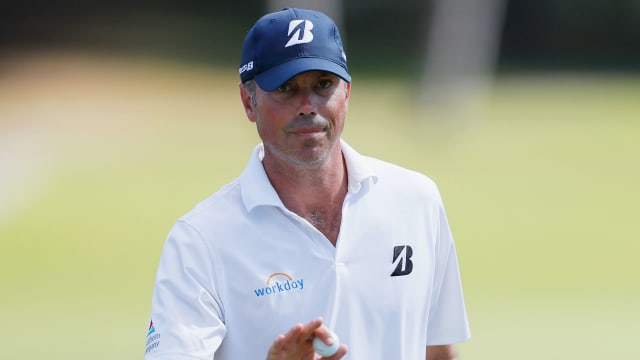 Matt Kuchar fired a second straight seven-under 63 to take the lead at the Sony Open in Hawaii on Friday, while Jordan Spieth missed the cut.

Kuchar will enter the weekend as the 36-hole leader after another 63 at the Waialae Country Club in Honolulu, Hawaii.

The American was nearly mistake free, starting his round on the back nine with four birdies in five holes. His only blemish came at the par-four 15th but he recovered with an eagle at 18 and birdies at three and nine.

Andrew Putnam sits one stroke behind Kuchar in sole possession of second place. He used five birdies to stay in contention, including a 52-foot putt on the par-three seventh.

He is 13 under for the tournament after shooting a five-under 65 on Friday.

Chez Reavie and Stewart Cink are tied for third place at 10 under while Ted Potter Jr. and Australian Marc Leishman are a shot further back.

Reavie, who got his only PGA Tour win in 2008 at the Canadian Open, had one of the most impressive rounds as he became the first player in the ShotLink era with three eagle hole-outs from 100-plus yards in the same round. He also became the first player with three eagles on par-fours in the same round and is now tied for the most eagles on par-fours (six) since the start of last season.

Defending champion Patton Kizzire dropped down the leaderboard but had an impressive shot on the par-four 12th. Kizzire's round was plagued with bogeys as he finished with five, but he holed out on 12 for his lone eagle. Kizzire sits with 14 others in a tie for 20th place at five under.

Spieth, making his 2019 debut in Hawaii, was flirting with the cut line late in his second round. He carded three birdies and one bogey on the front nine on Friday, and another birdie and two bogeys through five holes after the turn.

Spieth needed to birdie his last four holes if he wanted a chance at playing through the weekend, and he was on track to do so. He birdied the par-four 15th and 16th. But, a par on 17 halted his final push. He ended with a birdie on 18 to finish one stroke shy of making the cut. It is the first time in six years Spieth has missed a cut in his first start of the season.

He'll need an eagle at the 18th hole to make the cut @SonyOpenHawaii. pic.twitter.com/TW1ZnvKkgN

Other notable names who did not make the cut, which was two under, were Zach Johnson, Bubba Watson, Paul Casey and Adam Scott.