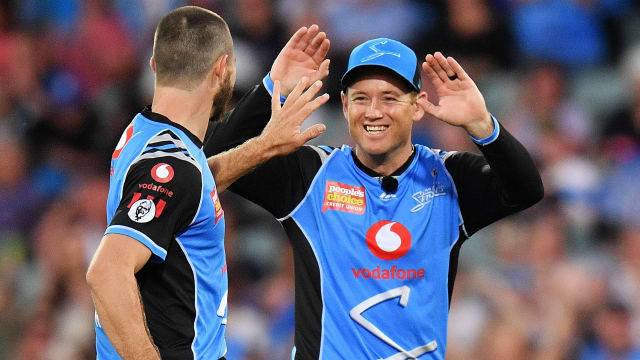 Colin Ingram hit a half-century as Adelaide Strikers thrashed Melbourne Stars by 41 runs to move above them and up to second in the Big Bash League ladder.

Defending champions the Strikers surged up the standings after cruising to a home victory on Friday, their third win in four handing the Stars a second straight defeat.

Ingram scored 57 from 41 balls, his second fifty in this season's competition, as Adelaide posted 178-5 despite four wickets from Liam Plunkett (4-36).

Openers Evan Gulbis (37) and Ben Dunk (20) gave the Stars a decent start but the end of their 50 partnership saw the visitors crumble to 137 all out, the final wicket falling with four balls remaining as the Strikers bowlers shone despite the absence of Australia duo Peter Siddle and Billy Stanlake.

The @StrikersBBL come out on top in a topsy-turvy clash and move to second on the table!

Other than a 75 against Sydney Thunder, Ingram has struggled this season, but the former South Africa international produced an impressive performance here, finding the boundary six times including two maximums.

He came in with the score at 21-2 after Plunkett and Jackson Bird (1-13) had quickly seen off Strikers openers Matthew Short (1) and Jake Weatherald (15).

But his crucial third-wicket partnership of 74 from 51 deliveries along with captain Travis Head (43) - who smashed three consecutive sixes before being dismissed in the space of four balls in an astonishing 13th over on his return from Test duty with Australia -  changed the game.

By the time Ingram was caught by Gulbis off the bowling of an impressive Plunkett, who also accounted for Head and Rashid Khan (13), the Strikers had the platform to make a fast finish.

After Ingram, Head and Khan had got the Strikers on track, they still needed late runs with the score at 134-5 with 19 deliveries remaining.

Jonathan Wells gave the hosts exactly what they needed, smashing an unbeaten 32 off 14 with five boundaries to help the Strikers to a total the Stars never came close to matching.

The Stars' Dwayne Bravo (0-51) took much of the punishment, bowling a final over which went for 23 runs courtesy of four Wells boundaries, continuing a nice run for the batsman who produced unbeaten knocks of 22 and 42 coming into the game.

Whoops... we nearly went an entire game at Adelaide Oval without posting a pic of how beautiful this venue is! #BBL08pic.twitter.com/swvW4DbtTW

Gulbis and Dunk combined for nine boundaries as the Stars reached 50 without loss from only 31 balls, but their wickets proved decisive.

Michael Neser (2-32) made a crucial catch in the deep off the bowling of Ben Laughlin (3-19) to get rid of Dunk, and Nick Larkin had already fallen for a duck before Gulbis was clean bowled by Wes Agar (2-32).

Khan was as economical as ever to strangle the Stars from there, his four overs going for only 18 runs and his single wicket dismissing Bravo (33), who was the only member of the Stars' middle and lower order to offer any kind of resistance.