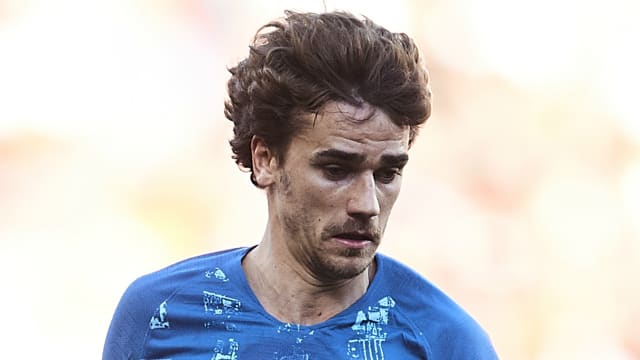 Antoine Griezmann continued his goalscoring streak as Atletico Madrid drew 1-1 at Girona to edge them towards the last eight of the Copa del Rey.

Diego Simeone's side have not beaten Girona since they were promoted to LaLiga in 2017, but the visitors looked prime to end that run when Griezmann fortuitously put Atletico into the lead after nine minutes with his seventh goal in eight games.

However, the hosts hit back 25 minutes later as Anthony Lozano netted only his second goal of the season on a night when he was a thorn in Atletico's side.

Simeone will fancy his chances of guiding Atletico to a seventh consecutive appearance in the quarter-finals given they are unbeaten at home this season, but Girona will stand a chance in the second leg if they put in the kind of spirited display that saw them fight back to earn a draw.

The hosts' good start turned sour when Griezmann met Nikola Kalinic's neat pass with a side-footed first-time shot from just inside the box that went in off goalkeeper Gorka Iraizoz.

Girona hit back when Aleix Garcia's clever ball picked out Lozano, who took a touch and stroked a dipping shot towards goal that Antonio Adan could only help into the net with a punch that lacked the strength to push it over the crossbar.

Lozano then crashed a header onto the underside of the bar, only to see it bounce back out as Atletico ended the half fortunate to be level.

Kalinic missed two chances early in the second half, heading straight at Iraizoz with the first before turning the Girona defence and blazing over the target from 12 yards with the second.

Seydou Doumbia had plenty to aim at when the ball fell to him on the edge of the six-yard box but he scuffed his shot in what proved to be Girona's last clear-cut chance of the evening, leaving them needing to spring a surprise in Madrid next week.

93' | 1-1 |  The game ends at Montilivi! All to play for at the Wanda @Metropolitano!#AúpaAtleti#CopaDelRey#GironaAtletipic.twitter.com/6z1j78hM8y

What does it mean? Atletico still short of their best

After a disappointing draw at Sevilla in LaLiga on Sunday, Atletico looked set for a morale-boosting win after Griezmann's opener but they were pegged

Girona's goalkeeper should have done better with Griezmann's goal but he kept his side in the tie with a string of saves, none better than a one-handed block over his head to prevent Vitolo's close-range thunderbolt.

Godin struggles to cope with Lozano

Atletico are in action in LaLiga on Sunday morning when mid-table Levante are the visitors to the Wanda Metropolitano, while Girona will hope to end their five-game LaLiga winless streak at home against Deportivo Alaves a day earlier.