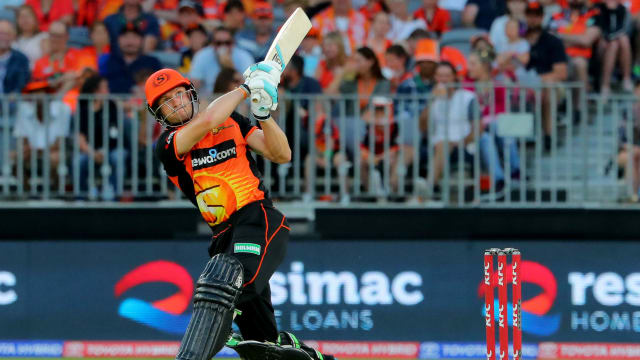 Cameron Bancroft made a half-century and Andrew Tye starred with the ball as Perth Scorchers ended a three-match Big Bash League losing streak win a six-wicket win over Melbourne Stars.

The Stars had won three consecutive matches but could only post 146-6 at the MCG on Wednesday after Tye claimed outstanding figures of 4-18.

Ben Dunk's 62 from 47 balls was unable to prevent the Scorchers from stopping the rot, Bancroft (59 from 42) scoring a first half-century since returning from a ban for ball-tampering.

In-form captain Ashton Turner bludgeoned a quickfire 43 to get his side home with 14 balls to spare.

The Scorchers remain bottom of the ladder, with the Stars third after two wickets in as many balls from Dwayne Bravo proved to be too little, too late.

Wickets for AJ Tye, runs for Cam Bancroft and an all-important second win of #BBL08.

Dunk had not passed 50 in the Stars' first five games but showed what he is capable of at the top of the order.

He put on 65 for the first wicket with Evan Gulbis after the Scorchers won the toss, scoring at around a run a ball before hitting the accelerator in the 14th over from Ashton Agar – striking the spinner for three boundaries.

Dunk was fortunate to reach his half-century when he pulled Nathan Coulter-Nile to Usman Qadir, who could only parry the ball over the ropes, and he was also put down in the next over before David Willey snared him two balls later.

Tye was left out of the Australia one-day international squad to face India and he sent a reminder to the selectors with a magnificent four overs.

The all-rounder saw the back of Nic Maddison with a rapid short ball, which the Stars captain – making his return from a broken wrist – fended up in the air to present Bancroft with an easy catch.

Tye continued to mix up slower balls with sharp pace, removing Bravo for a second-ball duck before sending Seb Gotch and Jonathan Merlo on their way in the penultimate over.

BANCROFT BACK IN THE GROOVE

Bancroft made starts in his previous two innings and the opener hung around on this occasion to lay the foundations for a much-needed victory.

He hammered Scott Boland over midwicket for six in the second over and struck Michael Beer for back-to-back boundaries, then reached his half-century from 36 balls after Michael Klinger was caught and bowled by Liam Plunkett.

Liam Bowe had Bancroft stumped after he launched Bravo for six down the ground, but captain Turner struck three maximums in a powerful 22-back knock to consign the Stars to defeat.