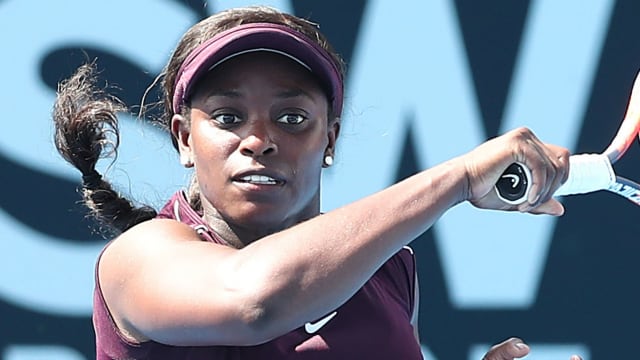 Sloane Stephens dug deep to win her first match of 2019 at the Sydney International having been two points away from a straight-sets loss against Ekaterina Alexandrova.

Fourth seed Stephens, competing in her first event since losing the decider of the WTA Finals to Elina Svitolina in Singapore in October, suffered a sluggish start as Alexandrova took the opener 6-0.

Defending champion Angelique Kerber also advanced via a 7-6 (7-3) 6-2 win over Camila Giorgi, despite achieving a first-serve percentage of just 44 in the opening set.

Kerber was the first to be broken but she hit straight back as Giorgi made four consecutive backhand errors, and after winning the tie-break the German reeled off five games in a row to clinch the victory.

Petra Kvitova saw off Aryna Sabalenka 6-1 7-5, with Daria Kasatkina the only seed to lose on Tuesday as she suffered a straight-sets defeat to Aliaksandra Sasnovich.

Two-time grand slam champion Garbine Muguruza also pulled out of the competition on Tuesday due to illness.

A host of seeds were knocked out of the Hobart International, including the top four ranked players Caroline Garcia, Mihaela Buzarnescu, Zhang Shuai and Maria Sakkari.

There were also wins in Hobart for Kirsten Flipkens, Alize Cornet and Alison Van Uytvanck.